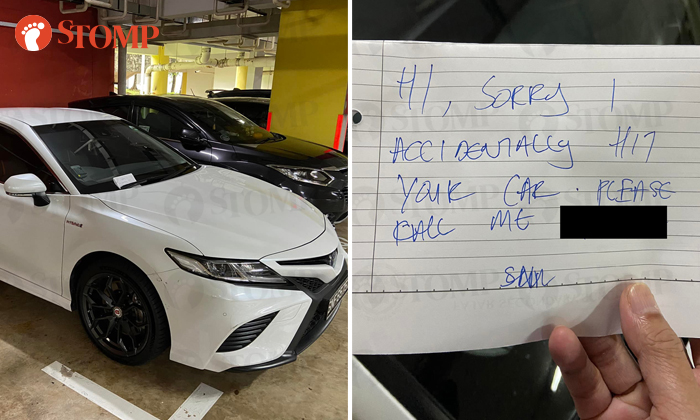 A driver accidentally damaged Stomper Francis's car and left a note asking him to get in touch — but no one has answered the phone despite him calling for two days.

Francis said he had parked his car at Greenridge Shopping Centre in Jelapang Road. He has season parking and left his car at Lot 101 at around 10.30pm on Monday (Aug 29).

To his dismay, he found his car damaged the following morning at around 8.40am.

Francis recounted: "I found that my driver side's front fender, bumper and rim were damaged.

"There was a note on my windscreen from the person who had caused the damage, but the number cannot be reached even after trying many times!

"Whenever I call the number, it’s an automated reply: 'The mobile service you have called is currently unavailable.'

"I have tried calling umpteen times over these two days and it’s always the same automated message.

"I have filed a report with the Traffic Police and my insurer."

The Stomper is now appealing for witnesses to the collision to come forward.

He added: "I sincerely hope any kind witnesses at Greenridge Shopping Centre can look through your car camera footage and inform me if you have captured anything."

If you have any information about the incident or are the driver who left the note, kindly contact Stomp at stomp@sph.com.sg or WhatsApp 9384 3761.