Driver crashes into wall of semi-detached house at Coldstream Avenue 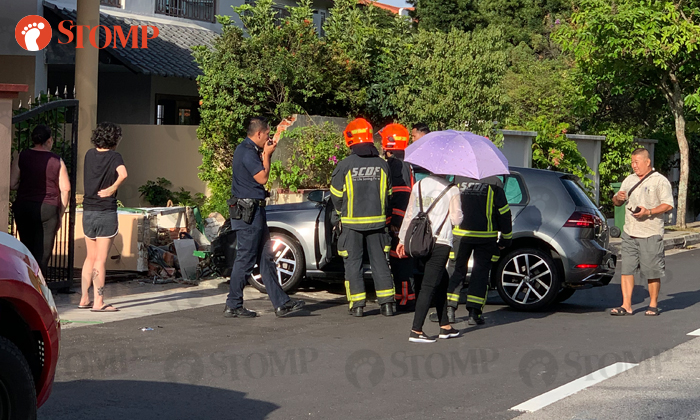 A car crashed into the wall of a semi-detached house in Siglap on New Year's Day (Jan 1).

Responding to queries by Stomp, the police said they were alerted to an accident involving a car along Coldstream Avenue at 5.17pm.

Stomper Derek, a resident in the area, said he looked out of his window after hearing a "big bang".

Photos that he submitted to Stomp show the damaged wall, as well as police and Singapore Civil Defence Force officers at the scene.

"I heard that he mistook the accelerator for the brake, hence the accident."

Related Stories
How did taxi end up at void deck of Ang Mo Kio block?
Female BMW driver, 67, rams through railing and falls 10m onto road after stepping on wrong pedal
Female driver ploughs into 2 bikes parked near Ubi coffee shop, ends up on walkway
More About:
accident
trapped in odd spot