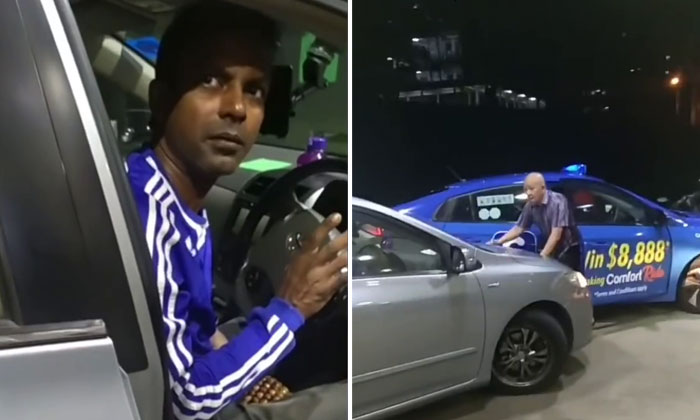 A driver was caught on video hitting a motorcycle along the Pan Island Expressway (PIE) and driving off without stopping on Dec 27 at about 11.43pm.

He was subsequently confronted by another driver at a petrol station in Bukit Batok before colliding into a taxi.

A Stomper alerted Stomp to a video of the incident that was posted on SG Road Vigilante's YouTube page.

In the video, a rider is seen lying on the road shoulder of the PIE.

The driver of the vehicle recording the footage is then seen increasing his speed to catch up with the car.

He then confronts the man, telling him that he hit someone on the expressway.

The man does not seem to register what the guy is saying.

He then drives off and hits a taxi while exiting the petrol station.

In response to a Stomp query, the police said they were alerted to the accident involving a car and motorcycle on the PIE towards Changi at about 11.43pm.

"The car subsequently collided into a stationary taxi at a petrol station in Bukit Batok," a police spokesman said.

"The motorcyclist, an 18-year-old man, was conscious when conveyed to National University Hospital."