Driver closes doors on elderly woman as she alights bus at Hougang interchange, causing her to fall 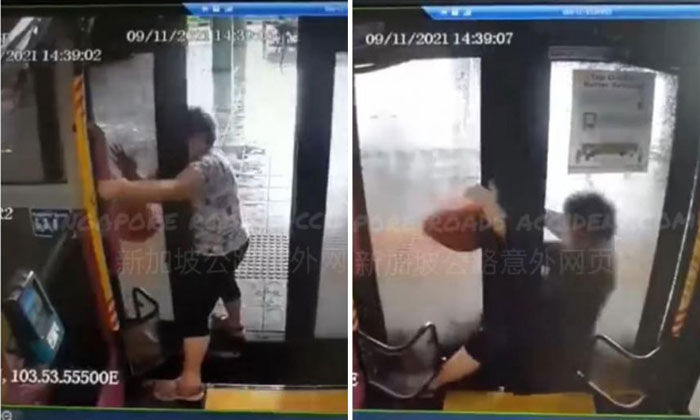 A bus driver closed the doors as an elderly woman was alighting the vehicle, causing her to fall backwards onto the road at the Hougang interchange.

The incident is believed to have happened at around 2.40pm on Tuesday (Nov 9).

A one-minute video of the incident, which appears to be footage from the bus' security camera, was shared on social media on Thursday (Nov 11).

The woman is seen struggling to alight from the bus as the doors close on her, causing her to fall into the gap between the bus and interchange platform.

Bus drivers in neon vests are seen rushing to her aid.

"The actions of our bus captain are most unacceptable," she said.

"It is fortunate that the lady wasn't seriously injured and received outpatient treatment at the hospital.

"We have taken strict disciplinary action against the bus captain and will be monitoring his performance closely."

She added that SBS Transit is in touch with the woman's family to offer its assistance, and wishes her a speedy and complete recovery.

Sbs transit bus captain at fault failed to check properly before closing the bus doors. the video shows a elderly woman starting to alight from the bus while holding a handrail. Just as she has her foot on the ground, the bus doors close, causing her to fall. Her left leg is seen trapped between the doors as she falls backwards lucky that the woman was not seriously injured, adding that she received outpatient treatment at a hospital. wish her a speedy and complete recovery," she said. the incident took place at Hougang Interchange. According to the timestamp of the video ,the incident it happened at about 2.40pm on 9 nov Thursday