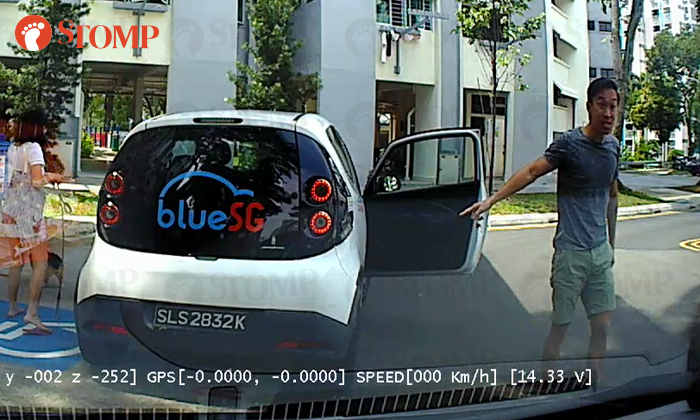 A driver refused to budge after blocking wheelchair access with his car and even turned nasty when he got honked at.

Stomper B shared a video of the incident that occurred at Block 371 Clementi Avenue 4 on Tuesday (July 20), at around 12.43pm.

B recounted: "I drove over to pick up my wheelchair-bound mother from a handicapped lot that has wheelchair access, but this driver was parked there.

"I waited for five minutes and sounded my horn lightly, but the driver turned aggressive. He came out of his car not wearing a mask and challenged me.

"He asked me what's the problem and said he parks where he likes even if it's a handicapped lot, and that he doesn't give a damn.

"You can hear how I kept asking him to drive away but he refused and challenged me to a fight. That's when my dad stepped in, stopped him from advancing and asked him to go."

In the video, B's elderly mother (in a red shirt) can be seen waiting on a wheelchair. His elderly father is later seen intervening and the driver eventually drives away.

B said he is unsure whether to make a police report as there was no physical alteration.

He added: '"This is really aggressive and inconsiderate behaviour, and the man was not even wearing a mask."