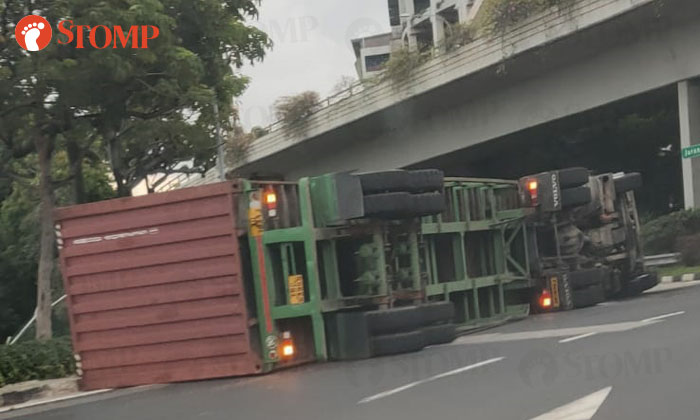 A 48-year-old driver is assisting police with investigations for careless driving after the trailer he was driving toppled over onto its side along Jalan Buroh on Friday morning (June 5).

Stomper Adi alerted Stomp to the incident after passing by the scene at about 7am.

"The trailer had overturned when I was passing by," he said.

"The driver seemed unhurt, I saw him directing traffic.

"There were no other vehicles involved."

Stomper Jeff shared with Stomp that he saw Traffic Police and Emas recovery trucks at the scene that afternoon.

"A crane was lifting the container and prime mover head," he said.

In response to a Stomp query, the police said they were alerted to the accident at 6.41am.

"No one was injured," a police spokesman said.

"The 48-year-old driver is currently assisting with police investigations for careless driving."