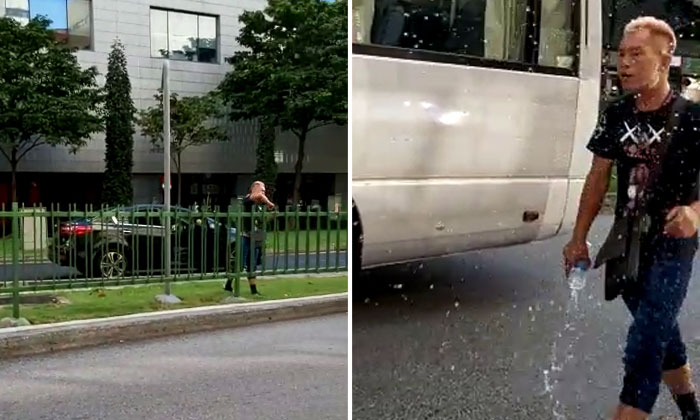 A new video has emerged of a man causing a scene in another road incident after he was arrested for committing a rash act that endangered the safety of others in a traffic incident at Geylang.

Stomper earlier reported the 55-year-old man was arrested on July 22 after he was suspected to have consumed alcohol and intentionally reversed his car twice into another person's car along Lorong 16 Geylang on July 21.

The police said in a statement that suspected drug paraphernalia were also seized from his vehicle.

After the report, Several Stompers alerted Stomp to a new video believed to be of the same man hurling vulgarities at another person.

In the video, the man is heard sounding his car's horn for a prolonged period of time before exiting his vehicle.

A voice is heard telling another man to "just go" because he is worried the driver will beat him up.

However, the man declines and says he has already called the police.

They do not appear to know why the driver is behaving aggressively.

When the driver exits his vehicle, he is heard hurling vulgarities and throws a water bottle across the road.

He comes over to the opposite side of the road to retrieve his water bottle while muttering expletives before returning to his vehicle.

He then drives off but reverses back to the same spot before the video ends.