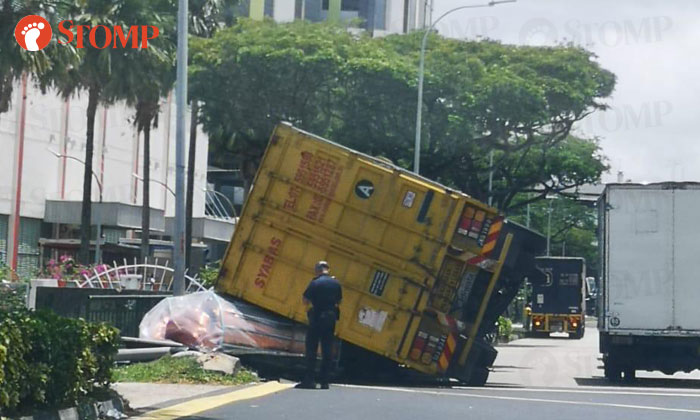 A 24-year-old driver was arrested after his truck overturned at the junction of Admiralty Road West and Woodlands Avenue 10 on Monday morning (Mar 16).

Stompers Lervi and Eric alerted Stomp to the incident and shared photos and videos of what had happened.

"We passed by at about 1.15pm and saw a Malaysian container truck had flipped onto its side," said Lervi.

The Singapore Civil Defence Force (SCDF) told Stomp it was alerted to the accident at 11.60am.

"One person, who had gotten out from the affected vehicle on his own, was assessed by an SCDF paramedic and he refused conveyance to the hospital," said an SCDF spokesman.

Responding to a Stomp query, the police said they were alerted to the accident at 11.49am.

"No injuries were reported," said a police spokesman.

"A 24-year-old man was arrested in relation to the case."