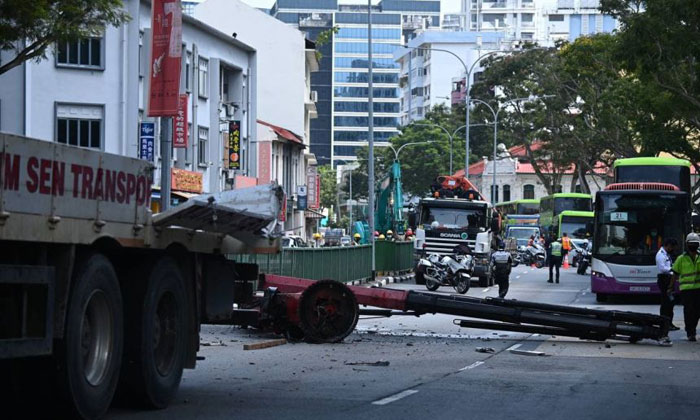 A lorry driver has been arrested after the mounted crane on his vehicle crashed into an overhead pedestrian bridge in Balestier Road.

A part of the crane was damaged and fell onto the road, blocking all three lanes.

The Land Transport Authority (LTA), which said the crane had not been fully retracted, diverted all affected bus services and closed the pedestrian bridge for assessment.

The man, who is 37, was driving towards Lavender Road at 10.30am when the accident occurred. It led to the road’s closure for about four hours, causing a major traffic disruption.

The police said the heavy motor vehicle exceeded 4.5m in height at the time of the accident and that it was on the road without police escort, which is illegal in Singapore.

The truck belonged to Gim Sen Transportation Services. A senior company official, who declined to be named, told The Straits Times that he was unsure what went wrong and that he was trying to help the employee.

He said the driver had been with the company for three months, but had driven in Singapore for many years.

The Singapore Civil Defence Force (SCDF) said one person had minor injuries and declined to be taken to hospital, although it did not specify if this was the driver.

LTA said there is some localised damage to the concrete surface of the pedestrian bridge but that its structural integrity has not been compromised.

The bridge will stay closed to the public until necessary rectification works have been completed.

In a statement, LTA said stern action will be taken if investigations find a breach in safety regulations.

“We would like to remind drivers of heavy vehicles to look out for overhead structures and ensure that any construction equipment they are carrying is carefully stowed away before driving off,” it said.

Balestier Road was reopened to traffic at 2.10pm.

Related Stories
SBS Transit bus driver and 2 passengers taken to hospital after accident with cement mixer truck at Aljunied Road
14-year-old cyclist killed in Marina East accident with trailer had wanted to be a cop
Van driver who seriously injured motorcyclist on BKE and drove off gets jail, fine
More About:
accident
arrested
crane
crash
bridge