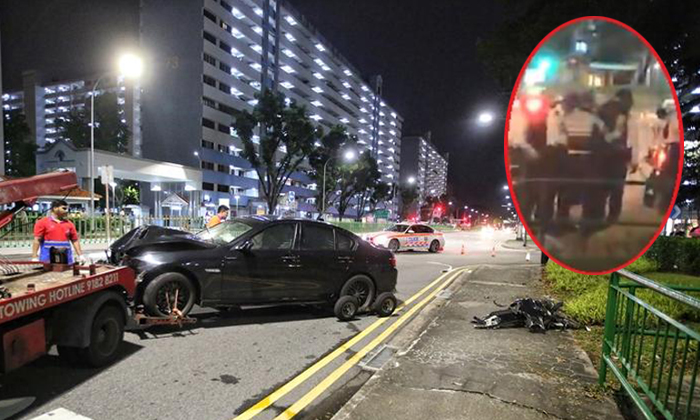 A 38-year-old man was arrested on Wednesday (June 19) for drink-driving and other traffic-related offences following a high-speed police chase that ended with him crashing into a tree.

Responding to queries, the police told Stomp that a Traffic Police (TP) officer had spotted a car driving dangerously along the Pan-Island Expressway, towards Tuas and before the Eunos exit, at 12.06am.

The driver refused to comply with the TP officer's instruction to stop.

"In the ensuing pursuit, an accident involving the car occurred along Geylang Bahru towards Bendemeer Road," added a police spokesman.

According to Shin Min Daily News, the driver crashed into a tree after losing control of his car.

The car had its airbags activated and its front bonnet was smashed.

The driver was conscious when taken to Changi General Hospital and subsequently arrested.

Mr Li, a 45-year-old resident in the area, told Shin Min that he was at home when he heard police sirens followed by a loud crash.

When he went downstairs to take a look, he saw 10 police vehicles and an ambulance at the scene.

Another resident, a 70-year-old housewife, said that the driver began vomiting when he got out of his car and was given a plastic bag by the police.