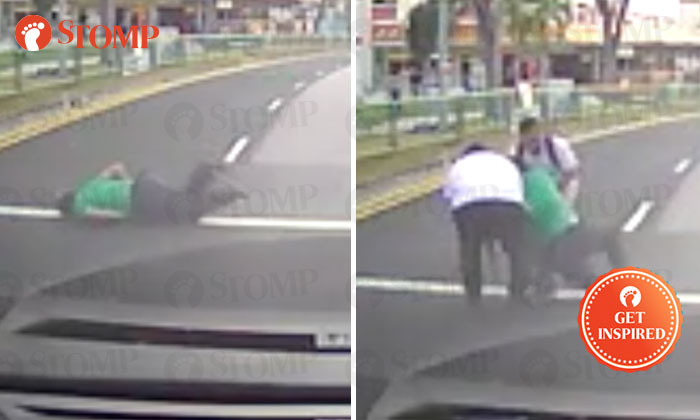 Stomper Hamad G was driving along Bedok Reservoir Road on Wednesday (Feb 28) at 7.56am when he came across an elderly pedestrian who suddenly fell at a traffic junction.

The incident was captured on Hamad G’s dashboard camera and showed the uncle in green suddenly diving headfirst onto the road while crossing a traffic light.

He lay on the road, unable to pick himself up.

Seeing this, Hamad G immediately got out of his vehicle and rushed forward to render assistance.

According to him, the uncle was bleeding profusely from his forehead.

Hamd G, together with a passing pedestrian helped the uncle off the road and moved him onto a staircase nearby.

He called for an ambulance and explained to the uncle that he was in a rush for work.

When Hamad G returned to the scene later, the uncle and the passerby were no longer there.

He later received a call from an ambulance staffer telling him that the uncle was nowhere to be found.

“He (the uncle) didn’t trip. If you watch the footage carefully, you’ll see that he started falling headfirst, but his hands were by his side the whole time.

“Normally, people would use their hands to reduce the impact of their falls, but the uncle didn’t.

“I think he might have suffered a minor heart attack. Anyone with information on him please let me know. I’m worried and I just want to know what happened to him.”

"The SCDF were alerted to the case near Block 739A Bedok Reservoir Road at 8am.

"Upon arrival, the man could not be found."