Driver, 54, taken to hospital after accident involving another car along SLE 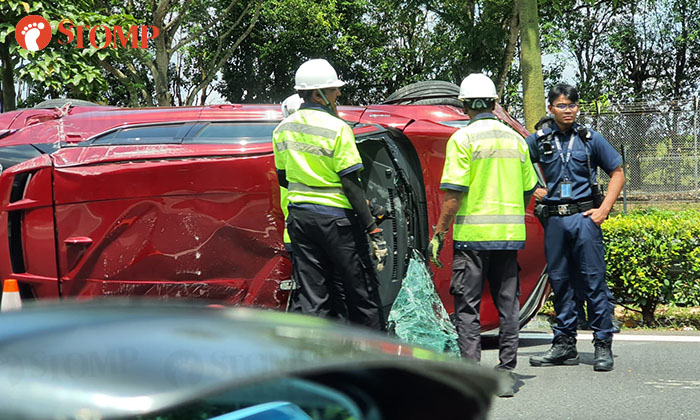 A 54-year-old driver was taken to hospital after an accident involving another car along Seletar Expressway (SLE) on Monday afternoon (Jan 13).

Stompers Richard and Loh contributed photos of the accident's aftermath as they passed by the site at about 2pm.

Richard told Stomp: "I was a passenger in a car and wondering why traffic was so bad at the time.

"I then saw the two cars, so I took photos and sent them to Stomp.

"The traffic jam caused quite a delay as I was returning to my office."

Photos show that a red car had flipped on its side.

Responding to a Stomp query, the police said: "On Jan 13 at 12.57pm, the police were alerted to an accident involving two cars along SLE towards Bukit Timah Expressway.

"A 54-year-old male driver was conscious when conveyed to Khoo Teck Puat Hospital.