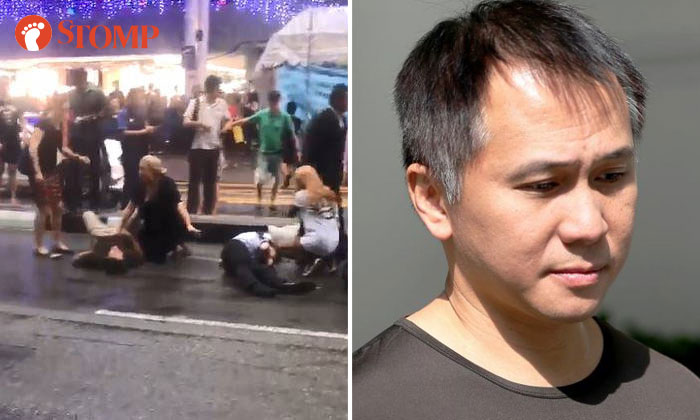 A drunken driver left behind a trail of devastation after he went behind the wheel on Dec 7, 2017, and ploughed into pedestrians.

The car driven by insurance agent Lim Kwong Fei crashed into three men and a woman standing on a centre divider and caused serious injuries, including multiple fractures to the men.

Lim's car also almost collided into a girl before it hit a taxi and a lorry, causing nearly $17,000 in damages to the two vehicles.

Lim, 42, was sentenced to 18 weeks' jail on Monday (April 1) after pleading guilty last week to drink driving and being incapable of having proper control of his Mercedes-Benz. He was also disqualified from driving all classes of vehicles for five years.

She said Lim had driven his car in a dangerous manner and the four pedestrians were "thrown into the air" when his car hit them.

The judge said: "The best policy is, if you drink, don't drive and if you drive, don't drink... It's better to be safe than sorry."

A search on the General Insurance Association Of Singapore's website did not reveal any information about Lim.

Deputy Public Prosecutor Jarret Huang said Lim was on a private yacht on the day of the accident where he consumed at least three cans of beer and a glass of red wine.

After that, he decided to drive to his office at Guoco Tower in Wallich Street near Maxwell Road for an event.

The DPP said Lim was "driving at a fast speed relative to the other cars" along Tanjong Pagar Road towards Neil Road when an eyewitness spotted his car moving in a zig-zag manner.

Court documents did not state the speed it was travelling at then.

At around 6.20pm, it mounted a centre divider and ploughed into Singaporeans Merlyn Lim Wei Xuan, 24, and Lim Yew Beng, 57; Myanmar national Nay Lin Tun, 30; and Mr Martin Guillian Noel Faron, 41, an Australian tourist who was in Singapore to celebrate his birthday.

DPP Huang said: "The accused continued driving his vehicle at some speed off the centre divider, onto the other side of the road... for about a further 20m, albeit against the flow of traffic."

He crashed into two vehicles before eventually stopping.

Police arrested Lim after he failed a breathalyser test at the scene.

At the Traffic Police headquarters in Ubi Avenue 3 later, he took another test and was found to have at least 31 micrograms of alcohol in 100ml of breath, lower than the prescribed limit of 35 mcg.

The four pedestrians were hospitalised for between one and 22 days.

Mr Faron, who has since returned to Australia, continues to suffer from weakness in his back.