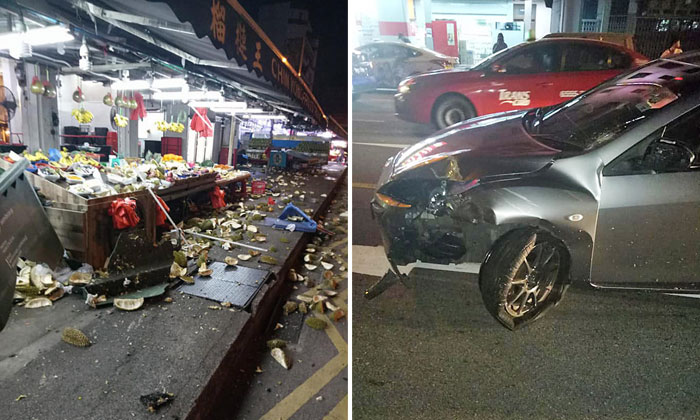 First the car crashed into a rubbish bin placed along the road, scattering discarded durian shells all over the pavement. Then, it ploughed into the durian stall nearby.

The incident occurred at the junction of Sims Avenue and Lorong 13 Geylang at around 2am yesterday. The male driver, 27, was subsequently arrested for drink driving.

Chinese-language newspaper Shin Min Daily News reported that after the crash, the driver stepped out of the vehicle and said he had to leave to relieve himself. But members of the public present were worried that he would flee and insisted he remain at the location.

Mr Soh, 33, one of the stall employees, told Shin Min that the car mounted the kerb when it hit the trash bin, and continued to move for another 20m before coming to a stop.

Said Mr Soh: "We operate 24 hours a day and have been doing business here for about 10 years but this is the first time such an incident has occurred. We had to take a few hours to clean up."

He estimated that the losses could amount up to $10,000 for damaged fruits that were on display, specially-made display shelves and durians that were supposed to be sent to supermarkets.