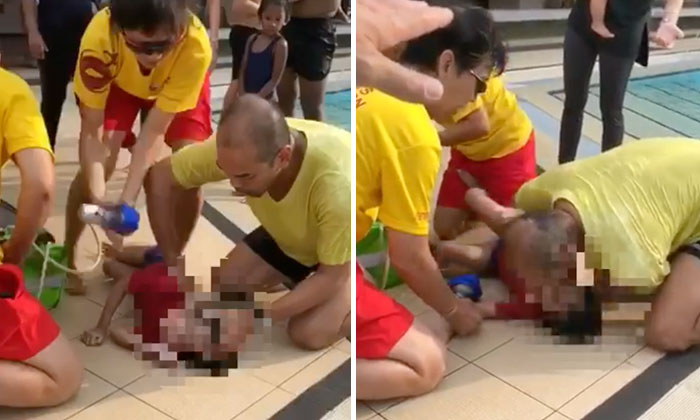 A five-year-old boy who nearly drowned while swimming at the training pool in Bukit Batok Swimming Complex, was saved thanks to the efforts of his father and two lifeguards.

A video of the incident which happened on Thursday evening (July 5) was uploaded by Facebook user Wong Chee Chai on Friday afternoon (July 6) and has been circulating on social media since.

In the video, the boy is seen lying at the edge of a pool, while two lifeguards are seen attending to him.

A man dressed in a yellow shirt, who later identifies himself as the father of the boy, performs cardiopulmonary resuscitation (CPR) on his son.

He proceeds to tap his son’s back, seemingly to encourage the boy to expel water which he had swallowed.

A woman is also heard saying:

“From just now you all do for what?”

At this point, the boy suddenly wails after regaining consciousness, and his father picks him up.

In response to a Stomp query, Sport Singapore clarified that there was only one incident, and confirmed that the incident happened on Thursday evening. There were no other reported incidents between Wednesday and Friday.

Also, it added that the child in the video, whom some had mistaken to be a girl, was actually a boy.

"Upon noticing the boy struggling in the water, his father and the lifeguards pulled him out of the pool and began to resuscitate him. After the boy regained consciousness, he was sent to the hospital."

"As drowning can happen very quickly, we advise all parents and guardians to ensure close supervision and to be within arm’s reach of their children in the pool at all times."