Double whammy: Driver stops and exits car after accident on PIE, gets hit by oncoming bike 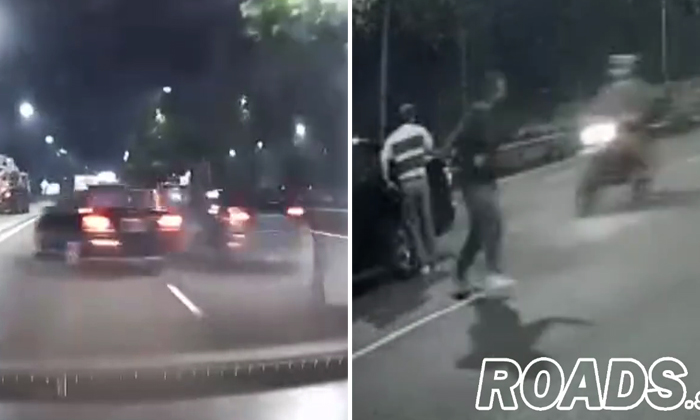 It was a bad day for a 66-year-old driver who was involved in not one but two accidents on the Pan-Island Expressway (PIE) on Friday (April 16).

A witness who had been travelling behind the man's car shared dashcam footage of both incidents, which was posted on Roads.sg's Facebook page.

The video shows how the man's car was first hit on its right by another car, causing it to skid. The second car, however, continued without stopping.

According to a caption accompanying the video, the driver "stopped his car in the middle of expressway" following the hit-and-run accident.

The witness added: "I stopped at the road shoulder and wanted to share with uncle my video footage and advise him to move his car to road shoulder for safety.

"Before he could do it, a motorcyclist came from the back and hit him. He was hurt and fell to the ground."

The video shows both men speaking and the witness waving away oncoming traffic.

A motorcycle is suddenly seen riding towards the two men. While the witness managed to flee in time, the driver was knocked down.

The witness said: "I helped him to the side of the road shoulder and called for help. Uncle is in hospital in stable condition... The rider is also ok... Let the police do their investigation job."

In response to a Stomp query, the police said they were alerted to an accident involving two cars and a motorcycle along the PIE, towards the airport and before the Lorong 6 Toa Payoh exit, at 1.13am on Friday.

"The 66-year-old male driver was conscious when conveyed to hospital," they added.