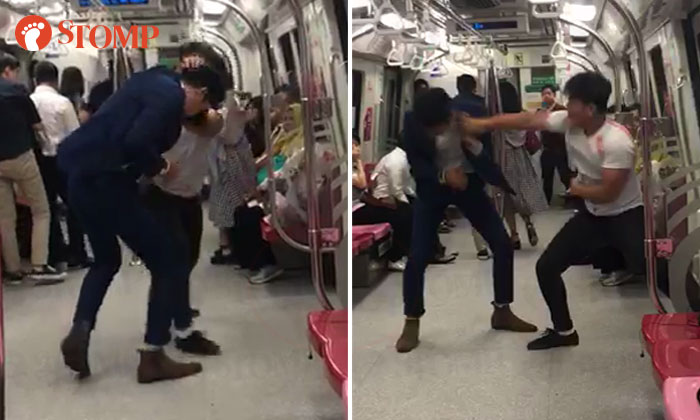 It was a double technical knockout for two MMA fighter wannabes brawling on an MRT train after they were both arrested by the police.

The two men were arrested for affray at Raffles Place MRT Station on Wednesday morning (Nov 7).

Several Stompers alerted Stomp to a video circulating online of the fight that happened on the East West Line.

In the video, the men are seen throwing punches at each other and trying to dodge the other's blows.

At one point, the man wearing a navy suit hurls vulgarities in Malay at the younger guy wearing a white T-shirt.

Other commuters on the train are seen walking away, trying to avoid the duo as they move around the carriage.

Stomp understands that the fight was allegedly sparked by a staring incident between the two men.

In response to Stomp's media queries, the police said they were alerted to the case of affray at about 10.48am.