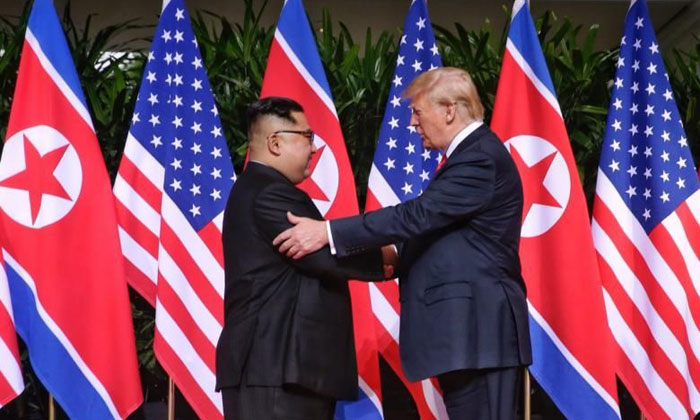 An iconic moment in history was made when United States President Donald Trump and North Korean Leader Kim Jong Un shared a 12-second handshake in front of American and North Korean flags at Capella Singapore hotel on Sentosa today (June 12) at about 9.03am.

This moment came after weeks of uncertainty and frantic planning by the US, North Korea and Singapore.

Just last month, on May 24, Mr Trump suddenly cancelled the planned meeting, only to reinstate it a week later after talks between officials from both sides.

In a brief comment to the media, Mr Trump said he expected to have "a great discussion", reports The Straits Times.

“I feel really great. We’re going to have a great discussion and will be tremendously successful. It’s my honour and we will have a terrific relationship, I have no doubt,” he said.

Mr @realDonaldTrump: "I feel really great and we're going to have a great discussion and, I think, tremendous success, it will be tremendously successful, and it's my honour and we will have a terrific relationship, I have no doubt."#TrumpKimSummit #SingaporeSummit pic.twitter.com/ZTt3Iw4IgO

Stompers Kwa, David and Daryl shared videos of the two leaders' motorcades making their way to Sentosa this morning.

Kwa, who works in the Keppel area, was standing by at Keppel Road to see the leaders pass by.

He told Stomp that he noticed several Traffic Police officers on the road and knew that they would be driving by soon.

At 8.07am, he saw Mr Trump's convoy including the president's iconic state limousine, The Beast, and its decoy.

Mr Kim's motorcade passed by soon after at about 8.21am.

"I was pretty excited to see them," said the Stomper.

"I hope that they are on the path to world peace."

Stomper David also shared a video of the two leaders and their entourage at Sentosa gateway.

Stomper Daryl was waiting with other motorists at Scotts Road for traffic to clear as Mr Kim and his motorcade drove down Orchard Road.