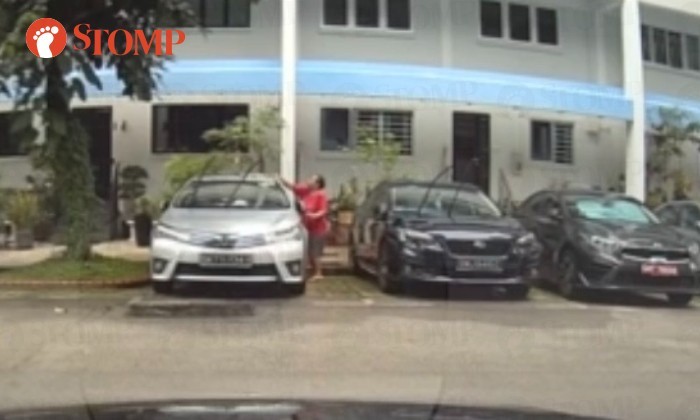 The Ministry of Manpower (MOM) has responded after a domestic helper was seen washing two cars at the carpark of Block 142 Serangoon North Avenue 1 on October 10 at 3.02pm.

Stomper Dominic was visiting the block when he saw what happened and shared the footage from his in-car camera to Stomp.

In the video, the domestic helper can be seen wiping a black car and a silver car with a cloth.

"I was at Serangoon North to pass something to a friend when I saw this happen," Dominic said.

"It was actually drizzling when the helper was cleaning the cars.

"I have informed MOM about this as I feel that this is overboard."

In response to a Stomp query, MOM said they have spoken to the foreign domestic worker (FDW) who was observed to be washing two cars at an open-air public carpark.

"She has clarified that both cars belong to her employer," said a spokesman for MOM.

"The FDW has also been working for the household since 2017 and has no well-being issues."

In March 2017, an article posted on The Straits Times Opinion sought clarity about the tasks helpers can or cannot do. This prompted a response from MOM, who said that a clear line between these tasks has been drawn.

In the response, which can be found on The Straits Times and the MOM website, the authorities said that "the role of FDWs in Singapore is clearly defined in our laws".

While FDWs and employers are broadly told of duties to expect in the mandatory Settling-In Programme and Employers' Orientation Programme, "it is impractical to detail every task as these vary with households."

"Most families and FDWs enjoy good relationships of mutual dependency, support and respect. Ultimately, fruitful employment relationships depend on give and take by both parties," added MOM.