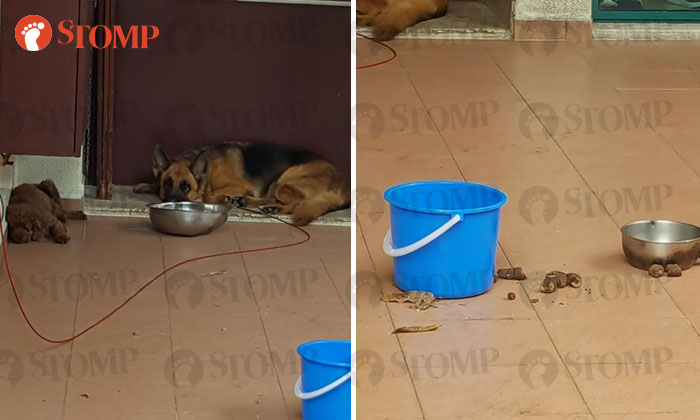 Stomper A was concerned after seeing his neighbours at 16 Corporation Walk tie their dogs to the porch while they went for a holiday on Thursday (Feb 15).

A told Stomp that he did not see his neighbours until Sunday night (Feb 18).

On Sunday afternoon, A had called the Agri-Food and Veterinary Authority of Singapore (AVA), National Environment Agency (NEA) and the Society for the Prevention of Cruelty to Animals (SPCA) regarding the incident.

Apparently, the place had been left stinking after the two dogs defecated and urinated on the porch, with no one to clean up after them.

“Usually when they (the neighbours) go on holiday, someone would come to care for the dogs, but this time no one came.

“I went to the house to check on the dogs, and they appeared to be weak.

“I think this is just inconsiderate and irresponsible.”

Asked if this was the longest that his neighbours have left the dogs alone, A replied:

“This is not the longest. They have left the dogs outside for longer periods than this, but at least someone would come to take care of the dogs in their absence.

In response to Stomp's media queries, a spokesman for AVA said it was investigating the case, while SPCA confirmed that it was alerted to the incident and assessed that the dogs were not in immediate danger.

Related Stories
Man, 23, kills dog by throwing it on bed and smashing it against wall, jailed 12 weeks
Most people walk their dogs -- but this woman drags her bird along with leash
More About:
animal abuse
animal cruelty