Dog standing on motorcyclist's shoulders along ECP is inappropriate and dangerous: SPCA 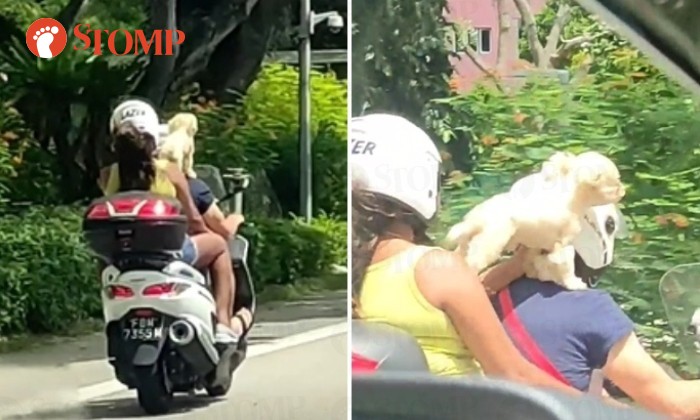 It is not uncommon to see dogs sticking their heads out of car windows to enjoy the breeze.

But when Stomper K saw a dog standing on a motorcyclist's shoulders along the East Coast Parkway (ECP), he knew this would be a cause for concern.

K told Stomp that he was in the passenger seat of his friend's car on Saturday (Dec 26) at 12.50pm when he spotted the dog.

In the video that he sent, the dog, who appears to be a toy poodle, can be seen standing on the motorcyclist's shoulders.

The pillion rider also seems to be holding one of the dog's legs with her hand.

"This doggie is a daredevil! How scary. I don't think the dog is enjoying this and this act is actually very dangerous for the dog and the cars around," K said.

"If something were to happen, it could endanger the dog, the motorcycle riders and others on the road."

In response to a Stomp query, Dr Jaipal Singh Gill, executive director of the Society for the Prevention of Cruelty to Animals (SPCA), said: "This is an inappropriate and dangerous way to transport a dog. It places the animal, the motorcyclists and other road users at risk."

Dr Gill added that SPCA has referred the case to the authorities so they can follow up with the motorcyclists.