Dog heard yelping all the way from opposite condo unit while being caned by woman, SPCA investigating 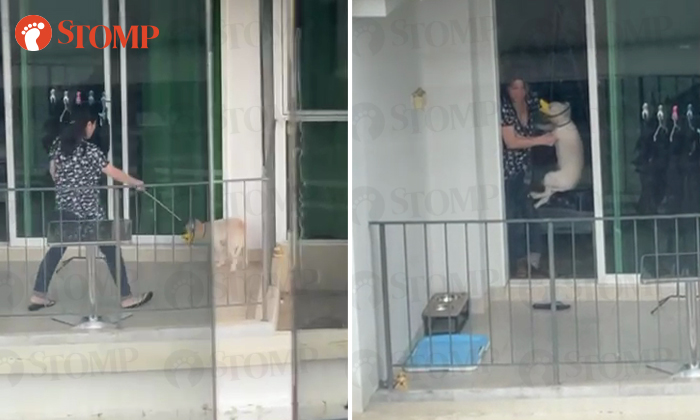 The Society for the Prevention of Cruelty to Animals (SPCA) is investigating an incident in which a woman was seen repeatedly hitting a dog with a stick on a balcony.

Stomper G witnessed the incident at VA Residences, a condominium along Boon Teck Road, on May 13 while visiting friends who had recently moved into a unit opposite the woman's.

G, who took videos of the incident and submitted them to Stomp, said: "This has been happening almost every other day ever since my friends moved there.

"The woman would also put the dog out when it rains, hit the dog continuously and even kick it."

In one video, the woman can be seen hitting the dog with a stick multiple times.

The dog, which is wearing a cone, is heard yelping non-stop while trying to get away. It is then backed into a corner, where the woman continues hitting it.

In the second video, the woman is seen carrying the dog back into the unit.

G added: "I have reported this to the SPCA."

SPCA's executive director Dr Jaipal Singh Gill said it is aware of the case and investigations are ongoing.

Dr Gill told Stomp in response to queries: "It is entirely inappropriate to hit a dog and to discipline an animal physically in this manner.

"The SPCA and many other animal welfare organisations promote a humane and force-free approach to animal training and handling. Visit our recently launched website at teachwithkindness.spca.org.sg to find out more."