Dog beaten by woman at Sembawang condo has been taken in by AVS, investigations ongoing 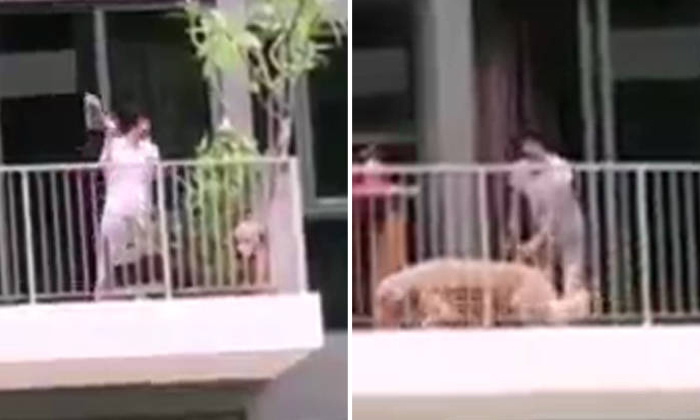 A dog that was seen being beaten by a woman at Skypark Residences has been taken in by the Animal and Veterinary Service (AVS) and is doing well.

A video of the alleged abuse sparked outrage after it was uploaded online by Facebook user Zoe Hannah in November.

The video, which appears to be a compilation of clips taken over different days, shows the woman repeatedly hitting the Golden Retriever with a broom on her condo balcony in Sembawang. She is also seen jabbing the animal with the broomstick.

The Society for the Prevention of Cruelty to Animals (SPCA) had earlier reported the matter to the authorities for further enforcement action, while the AVS said it was looking into the case.

In a statement on Tuesday (Dec 14), Ms Jessica Kwok, group director of community animal management at AVS under the National Parks Board (NParks), said: "AVS has taken in the dog since December 7. The dog is well and we are looking after it.

Members of the public who have any information relating to the case may report to AVS via its website at www.avs.gov.sg/feedback or call its Animal Response Centre at 1800-476-1600.

"As with all investigations, all forms of evidence are critical to the process, and photographic and/or video-graphic evidence provided by the public will help," Ms Kwok added.