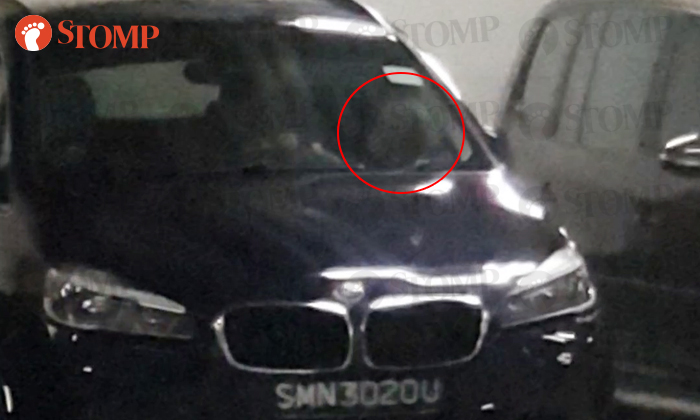 A dog was seen being clearly uncomfortable after being left in a BMW parked at the multi-storey carpark of Raffles City shopping mall on Saturday (Dec 7).

Stomper Strawberries and her friend came across the animal alone in the car at around 5.30pm.

She said: "The car had its window wound down very slightly (around one inch) and the dog was barking frantically for quite some time."

In a video submitted by Strawberries, the dog can be seen moving about in the car and barking.

Although Strawberries was unable to ascertain the total duration the dog was left in the BMW, she said it was for "at least 20 minutes".

The Stomper added: "My friend went up to inform the concierge so I took a video and waited for about 20 minutes.

"The concierge then sent security down to check but we are not sure what happened after that as we had already left.

"It's very irresponsible of the dog owner to do this."

Earlier last month, Stomper Ryan expressed similar concerns after seeing a dog left in a BMW at the carpark of Loyang Point on a sunny day.

The Society for the Prevention of Cruelty to Animals (SPCA) said in an advisory on its website that animals should never be left alone in vehicles.

"Contrary to popular belief, it is not okay to leave your pet in the car, even if it's for a short while, and even if the window is slightly rolled down," said the advisory.

"The temperature inside a stationary car can soar in just minutes, and increases exponentially as compared to the temperature outside the car.

'With their much smaller bodies, animals can sustain brain damage or even die from heatstroke in just under 15 minutes.

Members of the public who come across an animal left alone the car are advised to stay on the scene and try to alert the owner if possible.

They may also contact the SPCA at 62875355 with details of the car's colour, model, and licence plate number, as well as take a picture or video of the animal in the vehicle.