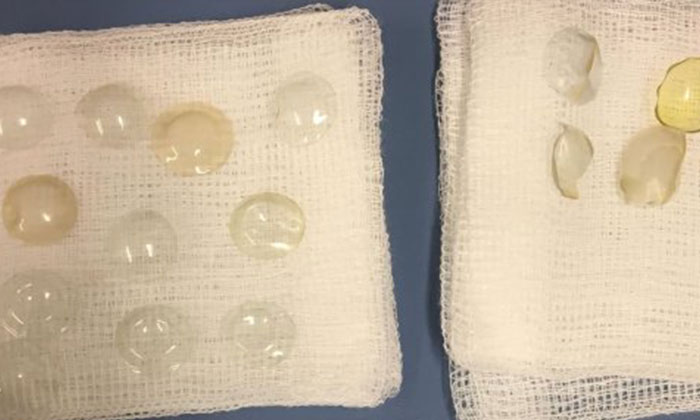 Eye surgeons from Solihull Hospital in England, got the shock of their lives when they discovered 27 contact lens stuck to one of the eyes of a patient they were preparing for a cataract surgery.

The 67-year-old female patient had initially attributed the discomfort brought about by the lenses which had gotten behind her eye, to old age and dry eyes.

It was later discovered that 17 of the lenses had been stuck together by mucus, while another 10 were found after examining her eye under a microscope.

The lenses, discovered by a group of surgeons, were described as a ‘bluish mass’.

Said Rupal Morjaria, a trainee ophthalmologist who was involved in the surgery:

“None of us have ever seen this before.

“It was such a large mass…

“We were really surprised that the patient didn’t notice it because it would cause quite a lot of irritation while it was sitting there.”

According to The Straits Times, the patient had been wearing monthly disposable contact lenses for 35 years.

She also said that she was unaware that the lenses were missing.

In light of the disturbing discovery, her cataract operation was postponed.

“When she was seen two weeks after I removed the lenses, she said her eyes felt a lot more comfortable.”

A medical journal cited that the case could have arisen due to the patient’s deep-set eyes.

It also highlighted the importance of selecting appropriate patients for the use of contact lenses, and periodically monitoring the wearers.