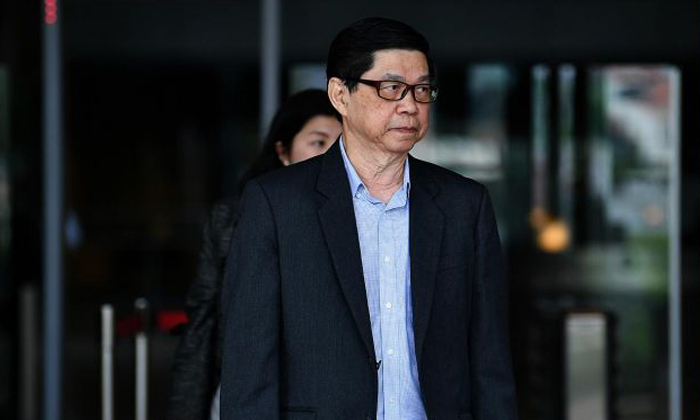 General practitioner Wee Teong Boo was sentenced to 10 years' jail on Wednesday (Feb 27) for sexually assaulting and molesting a 23-year-old patient at his Bedok clinic during two medical examinations, one month apart, in late 2015.

Wee, 68, was also ordered to pay compensation of $1,200 for therapy sessions to help the victim cope with the psychological effects of the sexual abuse.

Citing the victim’s testimony during the trial, Deputy Public Prosecutor Sharmila Sripathy-Shanaz said the woman experienced a “purgatory of confusion, anger and emptiness” in the aftermath of the sexual assault.

The victim told the court she was “living (like) the walking dead” for a long time.

“I cannot register why, why is it that (out of) so many patients, I am the one being picked for this?” she said.

The woman also questioned: “Why is it a doctor can become a beast overnight?”

She testified that she does not see male doctors anymore and cannot accept physical intimacy with men.

Wee did not display any emotion in court. He maintains his innocence and will be appealing against his conviction, his lawyer Edmond Pereira told the court.

The doctor was originally charged with one count each of rape and molestation. He fought the charges in a trial that began in April last year and ended in October.

The High Court on Monday cleared him of the rape charge, convicting him instead of sexual assault by penetration, based on the doctor's own admission that he had inserted his ungloved fingers into the patient using saliva as a lubricant.

This was after Justice Chua Lee Ming accepted medical evidence that Wee was suffering from erectile dysfunction at the time of the offences. The judge said there was reasonable doubt as to whether penile penetration could have taken place as alleged.

A spokesman for the Attorney-General’s Chambers said the prosecution will be appealing against the acquittal on the rape charge and the sentence meted out by the court.

The DPP had called for a total sentence of 12 years and seven months’ jail.

This included an additional three-month term in lieu of caning, as Wee is more than 50 years old.

“Unsupervised and unrestrained, Dr Wee gravely abused his position of trust and authority as a medical professional to deceive and take advantage of his patient, preying on her vulnerability and trust to indulge his own perverse, hedonistic sexual desires,” said DPP Sharmila.

“He has undermined every code and ethic known to the medical profession.”

She noted that Wee showed a lack of remorse and ran a “scurrilous defence” at trial.

The DPP pointed out that he had maligned the integrity of prosecution witnesses, including the doctor who examined the victim at the KK Women’s and Children’s Hospital, and called the police “stupid”.

During his trial, Wee claimed he had had inserted his fingers into the patient to conduct an internal examination in December 2015, as he suspected that the student could be suffering from pelvic inflammatory disease.

But Justice Chua rejected Wee's claims. He concluded that there was no medical basis to conduct such an examination and the patient did not consent to his actions.

Among other things, Wee claimed he forgot to use gloves, proper lubricant and to ask the patient if she needed a chaperone, which are basic requirements, because he was "caught off guard" when she complained of a genital itch.

Wee was also convicted of a second charge of molesting the victim during a consultation one month earlier.

Sexual assault by penetration carries the same prescribed sentence as rape - jail of up to 20 years, with caning or a fine.