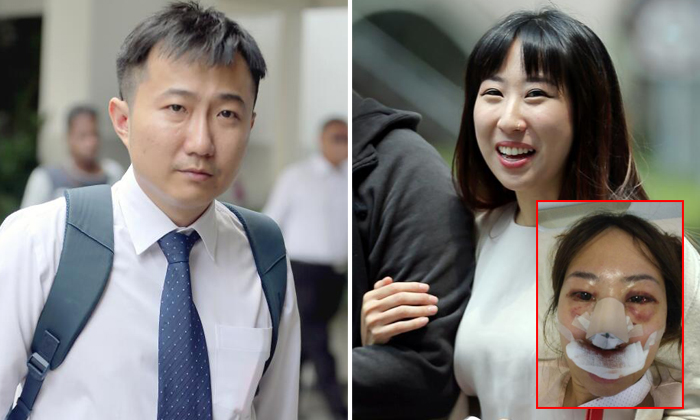 A doctor who was convicted in March of assaulting his then girlfriend, causing multiple facial fractures, pleaded guilty in court on Monday (June 22) to two more assault charges involving the woman.

Clarence Teo Shun Jie was sentenced to three years, six months and two weeks' jail with four strokes of the cane. He was also fined $4,000.

On March 9 after a trial, District Judge Toh Han Li found Teo, 35, guilty of one count each of causing grievous hurt to Ms Rachel Lim En Hui in his Redhill flat in August 2017 and of wrongfully confining her.

On Monday, Teo admitted that he assaulted Ms Lim on two separate occasions in March that year.

An online search reveals that he is still a medical practitioner.

Teo had told the court during the trial that he worked as a locum - or stand-in doctor - at clinics.

The court heard that Teo was "drunk... happy and tipsy" when Ms Lim, 27, who worked in the communications industry, met him at his flat on March 12, 2017.

The pair were in his bedroom later that day when he suddenly brought up her past relationships and yelled at her.

Deputy Public Prosecutor April Phang said: "When she asked him what was wrong, he punched her on the face before calming down.

"The force of the blow caused the victim to bite down on her own cheek and blood began coming out from her mouth."

Teo continued interrogating Ms Lim about her past relationships and threw another punch at her. She left the flat soon after.

He contacted her the next day to apologise and said that he had anger management issues.

He promised not to act in such a manner again and she accepted his apology.

But Teo broke his promise on March 30, 2017 after Ms Lim told him that she wanted to break up with him.

She was on her way to work at around 8am that day when she ran into him near her flat. Teo grabbed her left hand and dragged her into his car.

A struggle ensued and he struck her several times. He also punched her face when she tried to sound the horn to attract the attention of passers-by.

Teo then drove home with Ms Lim in the passenger seat. The pair went to his bedroom and he locked the door before punching her face again.

After that, he poured apple juice all over her and turned on an air-conditioner.

The DPP said: "The victim felt cold and asked the accused several times to let her change out of her wet clothes.

Teo refused to let Ms Lim leave even though she told him that she needed to obtain a medical certificate to excuse her absence from work that day.

He eventually relented after listening to her multiple pleas.

At a clinic, she was found with injuries including a bruised face, and was given two days of medical leave.

During the trial, the court heard that Teo attacked her again later that year.

Ms Lim had testified that she went out with him for a night of merrymaking on Aug 26, 2017, and returned to his home in the wee hours the next day.

The court heard that he "became enraged and turned aggressive" when she expressed reluctance to have sexual intercourse with him.

When she tried to leave his bedroom to escape from him, he pursued her, forced her back into the room, and locked the door, the court heard. He then assaulted her.

Teo's father, who lived in the flat, alerted the police at 4.12am.

Officers arrested Teo, and Ms Lim was taken to the Singapore General Hospital where she was hospitalised for 21 days.

Teo had earlier testified that he had a drinking problem which led him to perform "inexplicable things that were quite shameful and embarrassing".

He had also said that while he recalled having sex with her in his room, his "next memory" was waking up in a cell.

He had told Judge Toh: "I recall people handcuffing me... I didn't know where I was. Someone told me I was in Police Cantonment Complex."

Defence lawyer Tan Hee Joek had earlier said that his client suffered an alcoholic blackout that day and did not intend to commit the offences.

Related Stories
Doctor who beat up GF after she refused sex, left her with multiple facial fractures found guilty
Doctor who allegedly beat up then GF over sex says he has "very little control" when drunk
Doctor accused of assaulting then GF over sex says he is alcoholic: "I don't remember anything"
Doctor allegedly punched girlfriend's face after she refused to have sex with him, caused facial fractures
More About:
assault
doctor
couple
injured
court