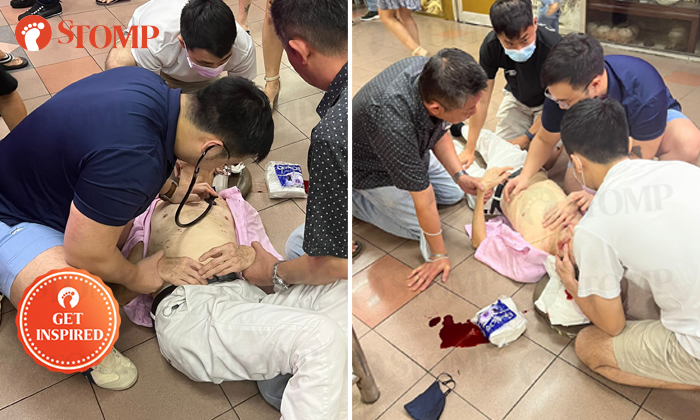 Brian Chin, 28, has never found himself in a situation where he needed to perform first-aid outside of the hospital that he works at -- until last Saturday (Aug 27).

Upon being alerted to an elderly man lying injured on the ground at Golden Mile Tower, he immediately sprung into action.

Dr Chin, a doctor at National University Hospital (NUH)'s orthopaedic surgery department, was among several parties who had attended to the man after his fall at around 9pm that fateful night.

Closed-circuit television (CCTV) footage provided by Stomper Kohji shows the man collapsing in front of the karaoke lounge and Japanese restaurant that he manages.

Dr Chin told Stomp that he had just finished a jamming session with his bandmates at The Basement Studio in the same building when he learnt of the man's fall.

He recounted: "We were playing music in the studio and just leaving the complex when two of my friends, Elisa and Wenwei, noticed someone lying on the ground, next to a pool of blood, with people surrounding him.

"Someone yelled for help, so I ran over immediately to assist in first-aid appropriately. As luck would have it, both Wenwei and I had just gotten off work before going to play music so he had a stethoscope in his bag.

"We used the stethoscope to assess the man's heart sounds and circulation."

Kohji, who had helped to show paramedics the way, commended Dr Chin's professionalism during the incident.

The Stomper noted: "Dr Chin was very professional when assessing the injured man. He also reported the man's condition to paramedics and at the same time, tried contacting the man's next-of-kin."

Dr Chin won praise from netizens after Kohji shared the incident on Stomp.

One user commented: "Dr Brian is indeed a very nice and affable doctor. Well-liked and respected in NUH."

Dr Chin, however, said that he was simply doing what anyone would in the situation and attributed it to a group effort.

He said: "I'm thankful to have Wenwei with me. He is also a doctor and we helped to render first-aid together.

"It's the first time we've had to render first-aid to someone in public. We treated him as how we would on someone in a hospital setting with a similar presentation, albeit without the usual logistics and manpower we usually get.

"We hope that this incident serves as a reminder on the importance of knowing first-aid, which may come in handy in such situations."

Dr Chin also lauded those who were at the scene.

"I must commend the people who helped the man out and assisted us with first aid," he added.

"Shopkeepers and passers-by helped to clear pathways and direct paramedics, as well as provide clean water and simple dressings. They did all they could to help make things smoother for the man's transfer to the hospital.

"This was a group effort and they are the true unsung heroes - we were merely doing what anyone would have when they see someone in need!"