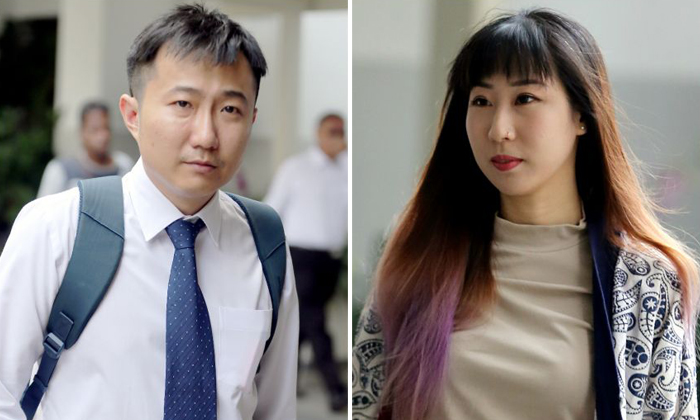 The doctor who was convicted last year of physically assaulting his then girlfriend, leaving her with a brain haemorrhage and fractures, has been struck off the Register of Medical Practitioners.

Clarence Teo Shun Jie was referred to the Singapore Medical Council's disciplinary tribunal last year, soon after his sentencing in June which saw him receive three years, six months and two weeks' jail, with four strokes of the cane and a fine of $4,000.

Under the Medical Registration Act, a medical practitioner convicted of a crime that implies "a defect in character which makes him unfit to practise medicine" may be referred to the disciplinary tribunal.

Punishment can include fines, suspensions and removal from the register of medical practitioners.

Teo, who was a locum, physically assaulted his then girlfriend on several occasions in 2017.

He had met the victim in February that year on a dating app. About a month later, during an argument, Teo assaulted her for the first time.

He did it again later that month and a third time in August 2017, assaulting her in his flat.

He locked her in a room and repeatedly assaulted her when she refused to have sexual intercourse with him. This attack took place over a two-hour period.

Teo's father, who lived in the same flat, alerted the police at 4.12am. Teo was arrested and the woman was taken to Singapore General Hospital (SGH) where she was hospitalised for three weeks.

He had punched her several times and hit her head against the wall, causing facial fractures and other injuries including a fracture of the left little finger.

The court heard that the 36-year-old had targeted her face "due to his deep-seated urge to ruin it".

In his defence, he told the court he had a drinking problem and suffered from alcoholic blackouts.

Teo, who is in prison, pleaded guilty to the disciplinary tribunal charges brought against him, which were based on the court charges.

He did not contest the allegation that his conviction on the criminal charges implying a defect in character makes him unfit for the medical profession.

His lawyer who represented him at the Singapore Medical Council disciplinary hearing asked for a two-year suspension as punishment.

He argued that Teo "has a high prospect for rehabilitation and a low chance of reoffending in the future".

But the tribunal noted in its March 4 judgment that Teo had assaulted the woman on three separate occasions, twice under the influence of alcohol.

It said the escalating severity of the victim's injuries "demonstrated a persistent lack of insight into the seriousness and consequences of his misconduct".

It was clear that there is "a defect in his character".

The tribunal added: "His criminal convictions have brought the medical profession into disrepute and his criminal misconduct is fundamentally incompatible with being a doctor."

So in order to "safeguard the public interests and to uphold the standing of the medical profession", it decided to strike his name from the medical register, which means he can no longer practise.

Teo also has to pay the costs and expenses of the hearing.

Related Stories
Survivor of BF's assault now hopes to help others: 'I put up with the abuse as I was scared to lose him'
Doctor who assaulted GF multiple times also poured apple juice on her and turned on air-con
Doctor who beat up GF after she refused sex, left her with multiple facial fractures found guilty
Doctor who allegedly beat up then GF over sex says he has "very little control" when drunk
Doctor accused of assaulting then GF over sex says he is alcoholic: "I don't remember anything"
Doctor allegedly punched girlfriend's face after she refused to have sex with him, caused facial fractures
More About:
assault
abuse
attack
couple
doctor
court