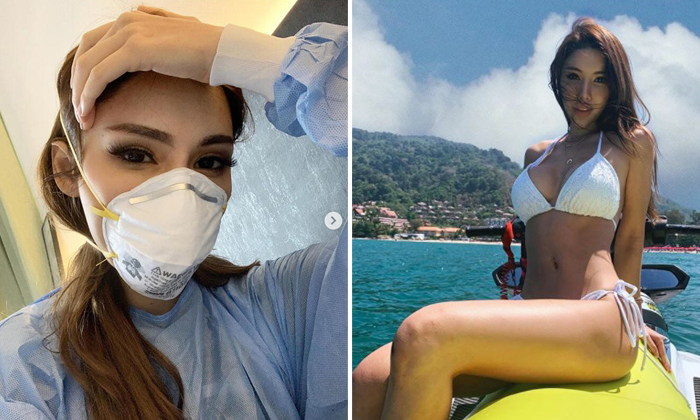 For the past four months, local influencer Jade Rasif has been quietly doing her part to fight the pandemic, working at the front line alongside her new colleagues.

The 26-year-old, who is known for her acting stints and as a prominent local DJ, had kept her new job secret, revealing it only to her closest friends.

But on Instagram two weeks ago, Ms Rasif posted a picture of herself in an N95 mask and personal protection gear, revealing that she is now working full-time in the healthcare sector.

Speaking to The New Paper yesterday, Ms Rasif explained that she revealed her new job as there were rumours she was selling sex to support herself.

"There was a sugar baby website using my photos, and some people were saying because I didn't have a job any more, (because of the pandemic) I must have been selling my body to support myself," she said.

Ms Rasif said she volunteered with the Singapore Healthcare Corps in April and underwent training before being deployed in May.

"I signed up to do logistics and data entry, but they said they needed people to help at the front line. So I said, 'All right, I'll do it.' And now I love my job so much," she said.

She declined to reveal which healthcare organisation she works for and her specific role, but said she has been deployed to places such as foreign worker dormitories and hotels.

The New Face 2013 runner-up said she was initially afraid of being at the front line but changed her mind after experiencing first-hand how careful the control procedures were.

In March, she was actually tested at the National Centre for Infectious Diseases after a scare from a fever, infected throat and breathing anomalies.

The experience stuck, and she said the nurses there made her feel reassured with their gentleness and compassion.

The former DJ said she now intends to pursue a career as a nurse and will enrol for a nursing degree course once the pandemic is over.

Her last gig as a DJ was on March 13 in Kuala Lumpur club Dragonfly.

"I really like it better than my old job.

"For the first time in my life, I am good at my job and people treat each other with respect," she said.

As she has chosen to pursue a full-time career in healthcare, Ms Rasif has had to drop all her other sources of income, from sponsorships to media appearances. She declined to reveal her previous salary.

Ms Rasif said she may still appear on talk shows or in videos but will no longer be taking any payments or sponsorships. She does not regret the change and encourages others to upskill themselves as well.

She used her SkillsFuture credits for a first-aid course three weeks ago and recounted how the skills came in handy last week when a patient suddenly had a bad nosebleed.

"I was able to manage the situation because of my new skills, and so I really encourage everyone to just put themselves out there and upskill," she said.