Dispute erupts after cabby says he gestured to give way, but motorist thought he flashed the finger 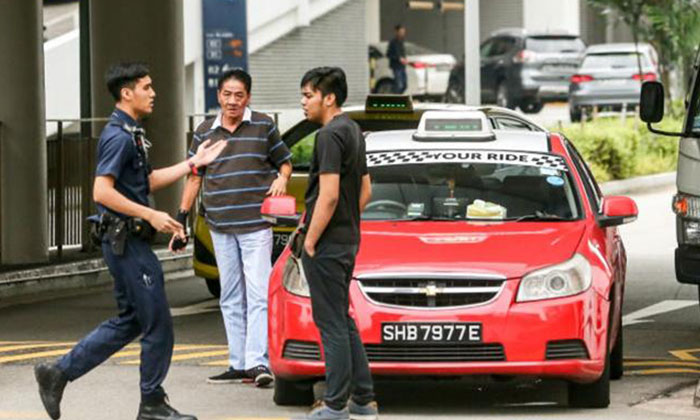 A taxi driver and a motorist got into a dispute when the former gave a gesture that was deemed offensive by the latter.

The incident happened near a HarbourFront Centre on Saturday (Jan 6), at around 1pm, and lasted for about 15 minutes.

A witness, Mr Chen, said that the motorist stopped his car behind the taxi, and alighted to confront the taxi driver in front of his cab.

Reporters subsequently contacted the taxi driver to find out more.

The cabbie, Mr Wu, 63, told Lianhe Wanbao that he was in the leftmost lane, and had let two cars pass when the motorist behind him suddenly alighted to confront him.

“He was shouting at me, asking me why I flashed him the middle finger.

“I explained to him that I was gesturing to let give way and that he was mistaken.”

However, the motorist did not accept Mr Wu’s explanation and demanded that he got down from his cab.

He stood in front of Mr Wu’s cab to prevent it from leaving and touched the front bumper with his foot.

“It was then security officers from the mall turned up.

“He (the motorist) accused me of hitting him with my cab and insisted on calling the police.

“He wouldn't let me leave and so I had to wait for the police with him.”

In response to media queries, a police spokesman said that officers were promptly dispatched to the scene to mediate the dispute.

It is understood that the motorist had complained that his right knee was hurting after the incident, and was conveyed to Singapore General Hospital (SGH) for a medical examination.

Asked how he felt about the incident, Mr Chen said:

"Having to dispatch emergency services for a dispute over trivial things is such a waste of resources.

“If there had been an accident nearby, would this have delayed the time it took to save the victims?

“They simply call the police without consideration. I am really disappointed.”

Mr Chen added that, furthermore, the two vehicles took up a lane during the peak hours and caused inconvenience to other road users.