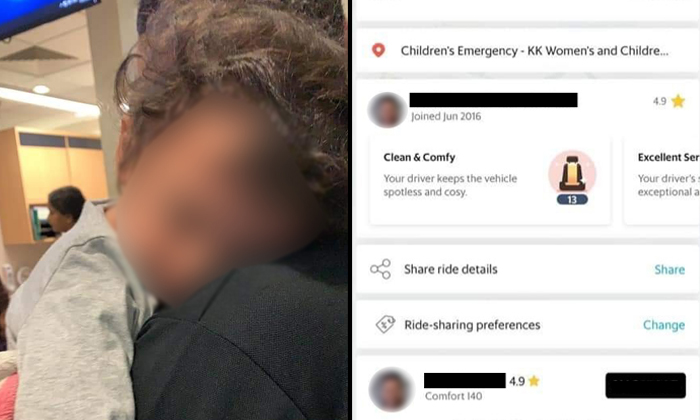 Transport operator ComfortDelGro said it has taken disciplinary action against a taxi driver who told his passengers to step out of his vehicle following a disagreement over payment modes.

Facebook user Ummi Abdullah Saadah, who has over 200,000 followers on the social media platform, called out the driver in a post that has since been taken down.

She said that her daughter and sick granddaughter had booked a cab ride to KK Women's and Children's Hospital.

According to a screenshot posted by Ummi, the booking for the standard taxi ride was made via ride-hailing app Grab.

Other photos accompanying the post show a sick-looking child resting on the shoulder of an adult and a ComfortDelGro taxi.

In her post, Ummi alleged that the taxi driver had told her daughter to "step out" of the cab "just because she wanted to pay by NETS and not cash".

Ummi's daughter then had to "step out" and "carry the pram out of the boot" despite having a child who had high fever with her.

Responding to a Stomp query, ComfortDelGro's group chief corporate communications officer Tammy Tan said: "The cabby's behaviour towards Ms Batrisyia Jamal and her child is not reflective of the standards we require of our cabbies and we have taken disciplinary action against him for that.

"For all ComfortDelGro booking and street hail jobs, cabbies are required to take any mode of payment as requested by the passenger. This was unfortunately not one of our booking jobs so we are unable to preside over the terms of that booking arrangement."

In an update on Friday (Jan 17), Ummi said that she had met with ComfortDelgro at its Sin Ming Drive office and would leave the matter to them as investigations are ongoing.

She wrote: "I trust they know what to do, I'm sure they have handled many, many cases and are experienced in handling and they have protocols to investigate. Let them handle it."