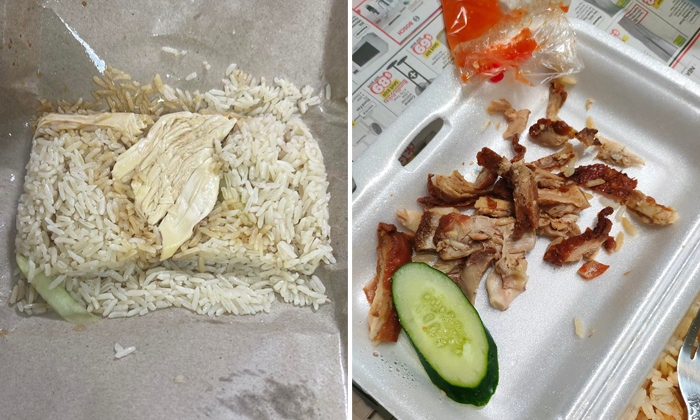 It has been over two months since Malaysia imposed a ban on the export of its chickens and consumers in Singapore are feeling the heat.

Core inflation here has also hit a 13-year high of 4.4%, with prices expected to continue soaring over the next several months due to the war in Ukraine still raging and supply chains being disrupted.

Paying higher prices for food but dissatisfied with the quality or portions? You are not alone.

Netizens have been complaining about chicken rice in particular, as seen in at least three posts in the Complaint Singapore Facebook group within one day.

In a post on Monday (Aug 8), Facebook user Ming Hong Lim shared how he got only "four tiny slices" of chicken in his chicken rice from a popular stall at Block 925 Yishun Central 1. 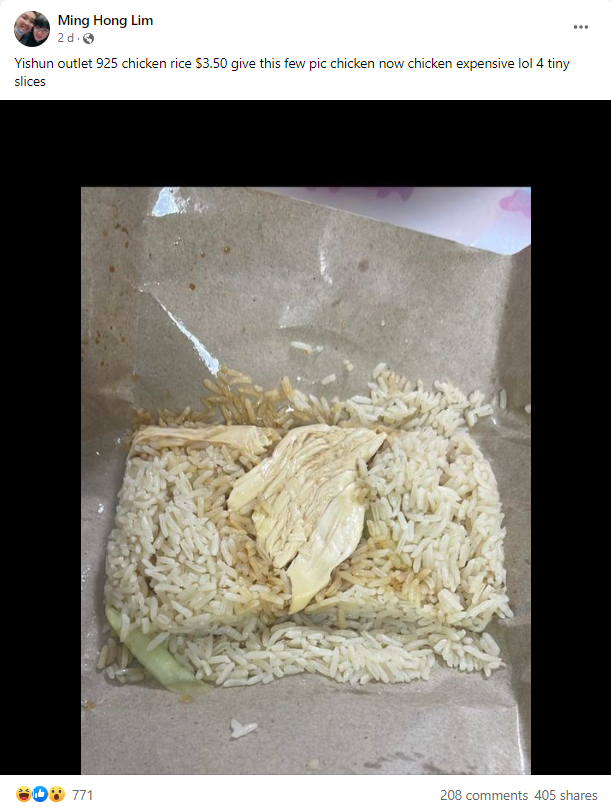 Lim's post has been shared over 400 times, with netizens sharing similar sentiments about the stall.

While some were sympathetic and said the stall cannot be faulted for rising prices for raw chicken, many users felt otherwise.

A few users said that the chicken rice chain's standard has been on the decline for some time, while one netizen commented: "Although chicken prices have increased, this could be considered as pure profiteering. Let market forces decide on their business volume."

Separately, another post in the Facebook group on the same day saw Facebook user Shiamala Devi Latchmanan complaining about the "horrible food" from My Kampung Chicken Rice at Kampung Admiralty Hawker Centre.

Shiamala, who paid $3.50 for her meal, wrote: "I asked for roasted chicken boneless breast meat and upon returning home this is what I saw in the box!!!" 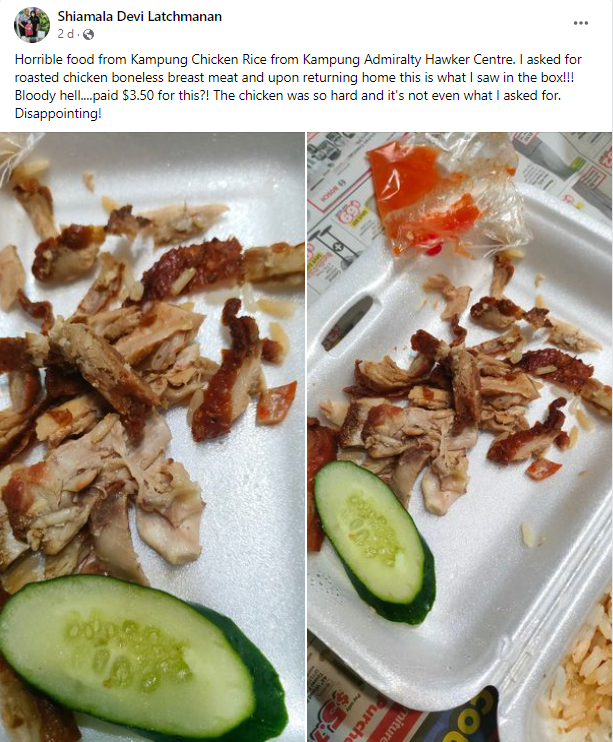 "Bloody hell....paid $3.50 for this?! The chicken was so hard and it's not even what I asked for. Disappointing!" she added.

Many netizens agreed that the chicken looked "terrible". Some also speculated that Shiamala had been given leftover chicken.

Facebook user Roony Roon echoed a similar complaint in the group on the same day. 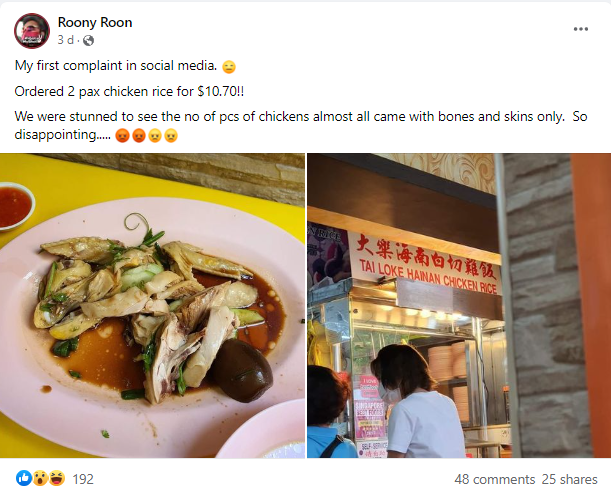 He said the few pieces of chicken he got "almost all came with bones and skin", the sight of which left him stunned and disappointed. In fact, he was left so unsatisfied by the meal that he "went for 2nd round after that".

Several netizens agreed that the portion was indeed small, with some noting that hawkers have been increasing prices and reducing portions to cut costs.

Hoping for things to get better soon? Short answer: Don't.

The world is not likely to return any time soon to the low inflation levels and interest rates that we had enjoyed in recent decades, said Prime Minister Lee Hsien Loong in his National Day message on Monday (Aug 8).

Singaporeans must brace themselves and be psychologically prepared that in the next decades, the region might not be as peaceful and stable as it has been, added PM Lee.

In fact, things are looking bleak, as one netizen rightfully pointed out.