Diners scolded by Bedok drink stall assistant for not ordering from him, NEA looking into alleged touting 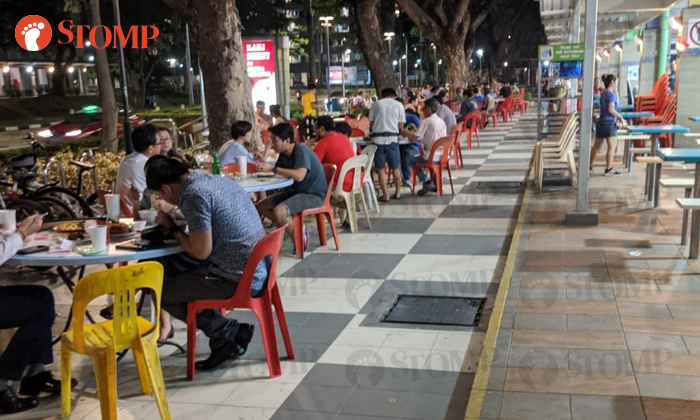 The National Environment Agency (NEA) is looking into alleged touting at Kaki Bukit 511 Market And Food Centre following feedback that patrons were supposedly harassed and scolded by drink stall assistants there.

Stomper Petrina said she had brought friends from overseas to visit the hawker centre, located along Bedok North Street 3, a few months ago.

The place was packed but the group eventually managed to find a table.

However, what was supposed to be an enjoyable dinner turned out to be a less-than-pleasant experience for Petrina and her friends.

The Stomper recounted: "After we found a table, we were told by one of the drink stall assistants that we had to order drinks from them as that area was their 'territory'.

"Throughout our dinner, we were approached countless times by several different drink stall assistants, which we found very irritating.

"Despite our constant refusal, we eventually gave in just so that they would stop pestering us.

"The ridiculous part was that we were scolded and shouted by the person who claimed that it was his 'territory', as we did not buy the drinks from him, but from another stall.

"This really ruined everyone's mood. How were we supposed to know which drink stall assistants belonged to which stall?"

"I also noticed some drink stalls using unopened beer bottles and beer mugs to 'reserve' tables for their regular customers, who were not even present.

"As this hawker is open to the public, I believe the table should be on a first come first serve basis."

Petrina said that her observations at the hawker centre left a "very bad" impression on the group, prompting them to write in to the NEA.

However, when they recently visited the hawker centre again, they noted that "nothing has changed".

She added: "As there have been no improvements, we decided to alert Stomp."

Petrina, who hopes to spread awareness about her experience, said that such practices "should not be tolerated" and called for action to be taken "to improve our local hawker experience".

Responding to a Stomp query, the NEA said it received anonymous feedback on alleged touting at the hawker centre and is looking into it.

"Stallholders and stall assistants who are found touting and harassing customers could have their stall tenancies terminated."

Related Stories
Photo of cabby pleading for leniency: He was given 'saman' of $200 for smoking in taxi, says NEA
NEA to take action against man who threw soiled diaper onto car at Tampines Mall
NEA explains viral photos of fines for shooting rubber bands and leaving drink cans behind
More About:
touting
coffee shop
rude
bad service
hawker centre
NEA