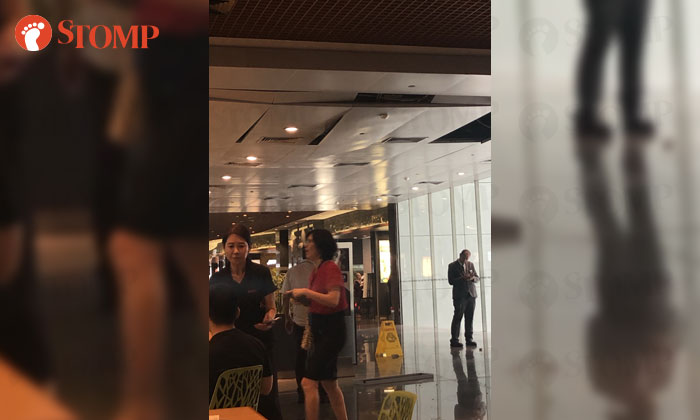 The lunch crowd at Asia Square's Food Garden were interrupted by a loud thud when a section of the ceiling at the food court collapsed on Wednesday afternoon (Apr 3).

Stomper Bel was at the scene and alerted Stomp to the incident.

"I was lunching at Asia Square when I heard a very loud thud," she said.

"When I turned around, I saw that a part of the ceiling had collapsed and there was debris lying on the floor.

"Luckily this happened around 2.30pm and not during peak hours so no one was injured."

She told Stomp that staff immediately cordoned the area.

"The whole structure of the ceiling seems unstable and looked like it could fall again any time," she added.

In response to a Stomp media query, Ms Amy Lim, General Manager, Centre Management Office, told Stomp that the management is investigating the cause of the incident.

"At around 2.20pm on Wed, 3 Apr 19, a small section of the ceiling was dislodged at Asia Square Food Garden," she said.

"Staff were immediately activated to cordon off the affected area, and carry out safety checks and cleaning.

"No one was hurt in the incident.

"We are investigating the cause of the incident and regret any inconvenience caused to our patrons."