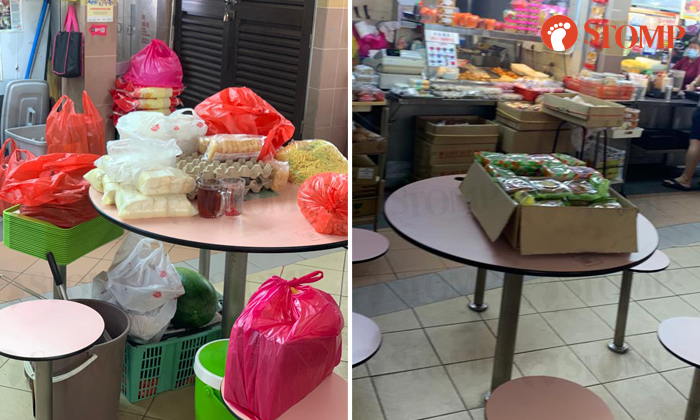 A diner has expressed his frustration at how difficult it is to find available seats and tables at hawker centres because of stall owners who hog them with their own items.

Stomper Francis said this is the norm at many hawker centres, with things being especially bad on weekends when there are crowds.

He noticed the same issue when he visited Tampines Round Market & Food Centre, located at Block 137 Tampines Street 11, on a Saturday (Aug 20).

Photos taken by Francis show various items placed on multiple tables and chairs by vendors at the hawker centre. Ingredients such as noodles, trays of eggs and even a watermelon can be seen.

The Stomper said: "This is still happening in most hawker centers. Stall owners have a bad and inconsiderate habit of chopeing public dining tables to put their stuff, depriving diners of seats.

"On weekends when the hawker center is crowded and diners are desperately looking for seats, such selfish acts of hogging are especially shameful.

"Perhaps it’s reasonable to do this on a weekday, except during lunch time, but to hog the tables and seats with their own items the entire day and every day is overboard.

"While I understand these items could be the stalls' freshly received supplies for the day and they might clear up later, they can put everything inside their stalls instead. Public dining tables are not their storerooms, especially during peak hours.

"I have seen other stall owners who don't do that with their fresh supplies. It’s a kind of self-entitlement for those who do so."

Francis said he had provided feedback to the National Environment Agency (NEA) about the issue and was told that the stalls have been counselled.

However, the situation continues to persist. Hence, he feels that imposing a penalty would be a more effective deterrent.

Francis explained: "The chopeing always resumes after awhile because there’s no penalty. Since there's no financial penalty, there's no deterrent."

A stall owner at the hawker centre attributes part of the issue to a lack of space.

The chef and owner of Rajarani Thosai clarified with Stomp: "While we are aware that there are hawkers who take up table space, that’s just the tip of the iceberg.

"I also feel that it is quite extreme to be labelled as table hoggers if, for example, we receive deliveries before business hours.

"Our stalls are not big as compared to coffee shops. Most of us work in a 6-metre-square space with three other staff members, a space which can barely fit a round hawker table with seats.

"With an ever increasing demand of cheaper hawker food and an obvious lack of space in our stalls, there’s only so much one can do. In other words, the busier we are, the less space we have."

In response to a Stomp query, NEA said: "Stallholders share the responsibility of maintaining proper upkeep, operation and management of hawker centres. This includes not placing their goods or items in the common areas which would cover tables and seats in the dining area.

"Stallholders are also reminded not to deny members of public from taking up seats at the dining area. All, including patrons, can exercise graciousness to one another when dining at hawker centres and sharing the facilities.

"With regard to the situation at Tampines Round Market & Food Centre, the stallholders had been reminded to keep items and goods within their stalls and not on tables, seats and the walkway."

Francis is not alone in his opinions about hawkers hogging seats with their own supplies. 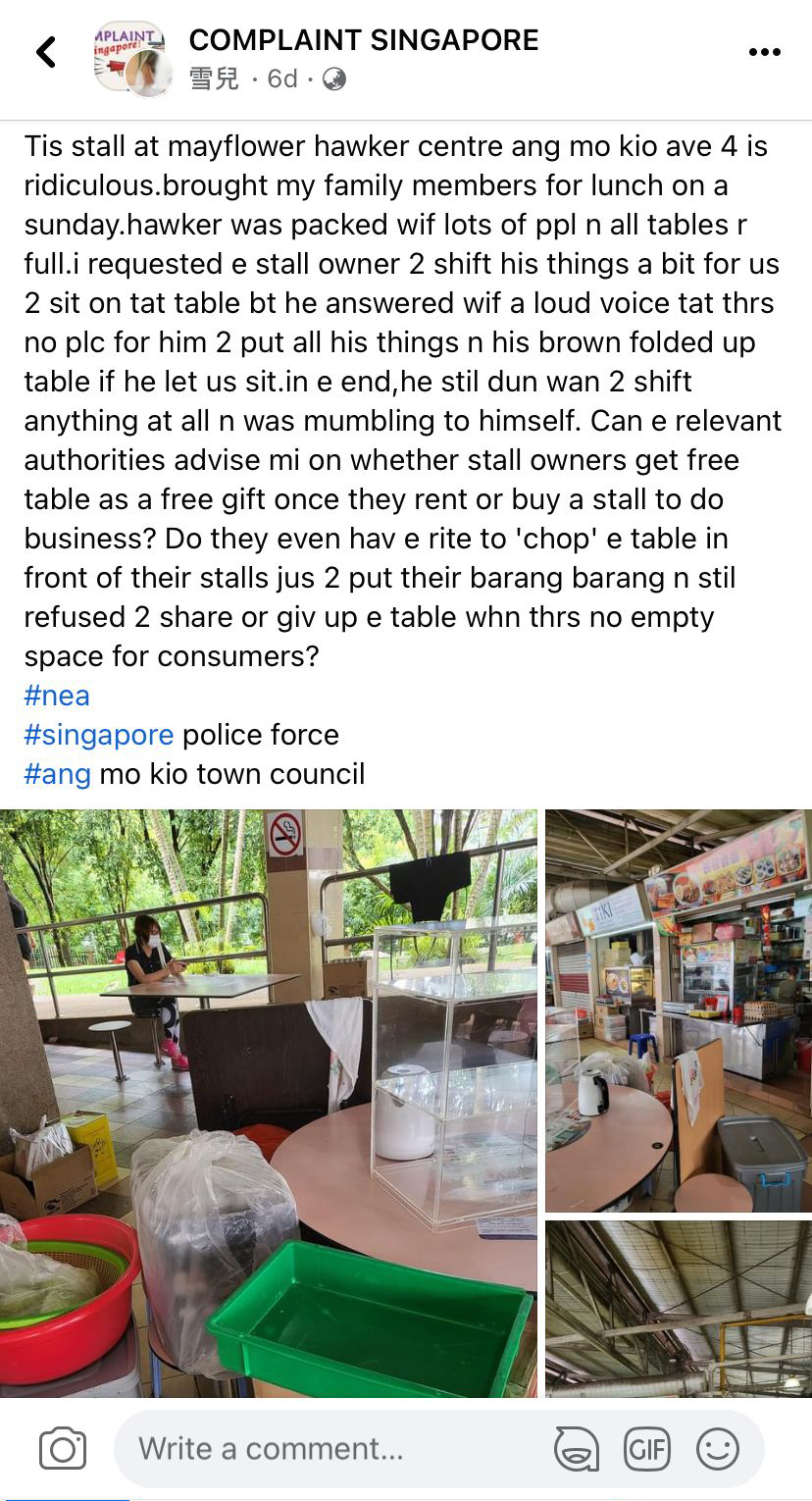 In her August 22 post, Xue Er recounted how a stall owner got upset after she told him to move his things from a table.

NEA has since reminded the stall owner to keep his items within the stall, and not on tables, seats and the walkway.

While some felt that the stall owner was rude and said he is not supposed to hog the table, others criticised Xue Er for being uncompassionate and ungracious.