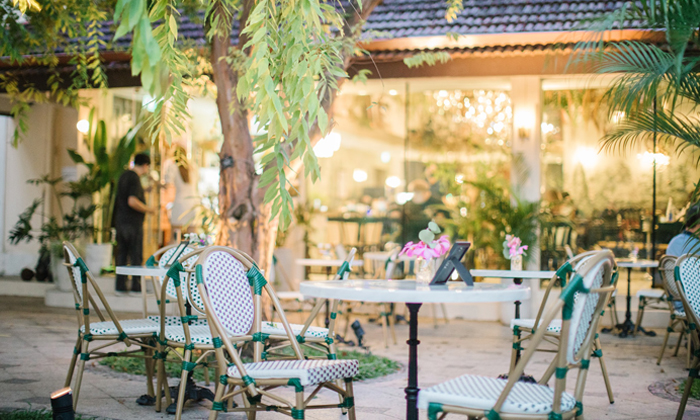 What was supposed to be a birthday celebration turned sour for a group of friends when they showed up at a restaurant for their dinner reservation, only to be informed that there would be a $50 charge for bringing a cake from outside.

Stomper Roy said he and his friends made a reservation for five people at Le Jardin, a French restaurant located at Fork Canning Park, on Monday (June 14) at 7.30pm.

They also brought along a cake purchased from elsewhere to mark the special occasion.

The group was dismayed when informed by the restaurant that outside food was not allowed and that there would be a $50 charge if they wanted to eat the cake on its premises.

Roy recounted: "Le Jardin did not allow a cake to be brought in by us for a birthday celebration. They claimed that no outside food was allowed and many restaurants in Singapore are like that as well.

"After some discussion, they informed us that they could allow us to eat the cake in the restaurant but a $50 charge would be added as they considered this an event.

"After discussion by their staff, they reduced the charge to $20 as they said our cake was small."

Disappointed, the group decided not to patronise Le Jardin in the end and went to another nearby restaurant in Clarke Quay instead.

Roy also emphasized that he understood the restaurant's policies, but wondered why diners were not informed in advance about the additional fee.

He told Stomp: "We respect the restaurant's rules. However, while we were making the reservation, we had informed the staff that it was a birthday celebration.

"They called us twice to confirm the reservation, and both times they were informed that it was a birthday celebration, yet nobody informed us that we couldn't bring a cake.

"Who wouldn't bring a cake for a birthday celebration? And why charge an extra $50 claiming that we are here for an event?

"I hope Le Jardin's management reviews their rules and regulations. Their staff also mentioned many restaurants in Singapore are like this but we beg to differ.

"Just because of a birthday cake which did not cost you a single cent, the restaurant lost a revenue of maybe $300 from a group of five. Good luck in surviving through these hard times."

Le Jardin has replied to a one-star review on Google regarding the matter. 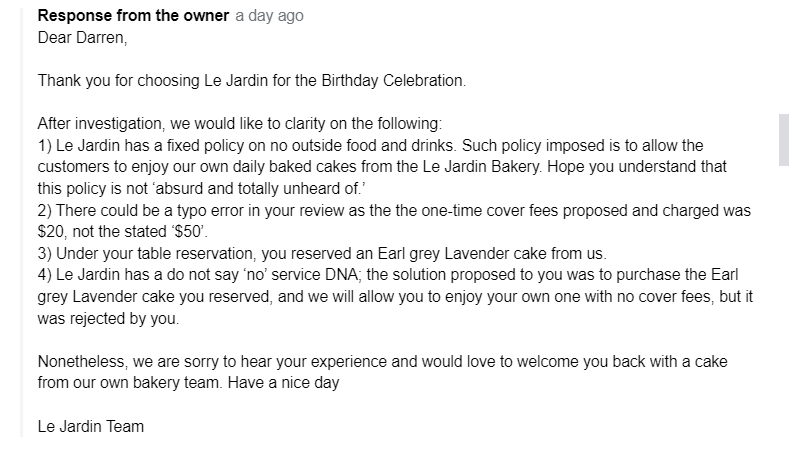 In its reply, Le Jardin said that the extra charge was to allow customers to enjoy its in-house bakery's offerings.

It also clarified that the group had ordered an earl grey lavender cake from the restaurant under their reservation, adding: "Le Jardin has a 'do not say no' service DNA; the solution proposed to you was to purchase the earl grey lavender cake you reserved, and we will allow you to enjoy your own one with no cover fees, but it was rejected by you.

"Nonetheless, we are sorry to hear your experience and would love to welcome you back with a cake from our own bakery team. Have a nice day."

Le Jardin told Stomp in a phone call on Friday (June 17) that the group's account of the incident was "inaccurate".

The restaurant also denied wanting to impose a $50 fee and reiterated that it had proposed $20 to the diners, pointing out that it would not make sense to charge more for bringing a cake than for their corkage fees.

However, Stomper Roy said this is "false information".

He told Stomp: "We didn't order an earl grey lavender cake. When they called us to confirm the reservation, they offered us a $12 slice of cake. The flavour was lemon vanilla, according to my wife who made the reservation. So if the flavor is wrong, you know who is telling the truth.

"Again, they didn't say no outside food was to be brought when they offered the $12 slice of cake. We were also not told that we could purchase a cake from the restaurant.

"And if I'm not wrong, they do not sell whole cakes at the restaurant as it's not a cafe. A full cake was what we needed for a birthday celebration, not a slice. If they had a whole cake, we would definitely buy and eat theirs, but they don't.

"When we were at the restaurant, they were all 'no no no'. For them to say they didn't ask for $50 is ridiculous.

"We were supposed to pay $12 for the slice of lemon vanilla cake. And because we were going to pay for the cake, they reduced the event fee from $50 to $20. So they were still going to charge us for cutting our own cake despite us also paying for a cake from their restaurant.

"If they had offered to let us purchase the $12 slice of cake and let us eat our own cake for free, we would have taken up their offer.

"Why would someone bring another cake if we had reserved an earl grey lavender cake?"

In 2018, food blogger Dr Leslie Tay aka ieatishootipost expressed his surprise at being charged $15 to cut a birthday at a pizza restaurant.

Dr Tay wrote in a Facebook post: In the end, we took the cake home to cut, because the birthday girl just did not feel it’s worth $15 to cut a 600g cake. It did burst the bubble on an otherwise joyous occasion.

"I hope other restaurants can see the marketing opportunity in this and go the other direction and signal that they welcome birthday parties by even offering a free cake!

"After all, isn’t a restaurant’s real mission to create a positive dining experience for the customer?"