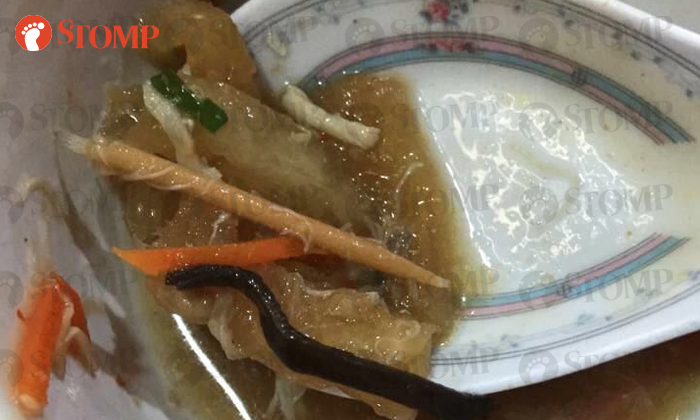 Stomper Linda's dinner at a restaurant along Jurong Gateway Road on Sunday (Feb 25) was marred when her friend found a toothpick inside his bowl of fish maw soup.

According to Linda, the meal had about eight courses and cost around $450.

She was part of a group of 540 people that had booked the entire Beng Hiang restaurant for a Chinese New Year dinner.

Linda said the fish maw was served from a huge pot, into individual bowls for each diner.

"My friend was shocked when he saw the toothpick in his bowl and showed it to all of us at our 13-seater table.

"He didn't dare to touch the fish maw soup anymore. Some of us stopped as well.

"Can’t imagine if the toothpick had been used by someone! Disgusting!

"We told the restaurant about it but were simply ignored. They did not even say anything."

Upon checking reviews on the restaurant's Facebook page, Linda discovered that there were also several other diners who had unpleasant experiences with the food there.

Related Stories
'Fried onion' in fish soup from Chong Pang stall turns out to be multiple insects
Crab! Diner finds rubber band inside his lunch from Little India restaurant
This is why you should focus on your food instead of phone when eating
More About:
food
unhygienic
disgusting
dirty