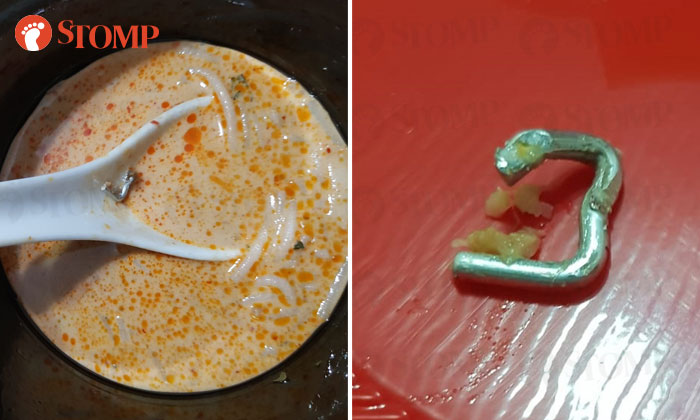 The Singapore Food Agency (SFA) is investigating an incident where a diner found a metal object in a bowl of laksa bought from 328 Katong Laksa at 51 East Coast Road.

Stomper Kok told Stomp he had bought bowls of laksa for his family on June 14.

"My mum was almost finishing her laksa when she found a sharp metal piece in the gravy," he said.

"I was appalled as this metal piece could have caused serious harm to anyone who ingested it, especially when the person in question is elderly.

"The way the stall's food was prepared is questionable and it is a serious case of pure negligence on the food handler's part."

Kok said he was unable to give feedback to the eatery via their Facebook page but said he intention was not to get a refund or replacement bowl of laksa.

"I hope the laksa outlet knows and understands the severity of this and I believe it can be achieved by having it highlighted via your channel."

In response to a Stomp query, an SFA spokesman said the agency has received feedback and is investigating the matter.

"Food safety is a joint responsibility," the spokesman said.

SFA conducts regular inspections of food retail establishments to ensure compliance with our regulations, and will not hesitate to take enforcement action if necessary.

"While SFA puts in place and enforces the regulatory measures, food operators must play their part by adhering to good food hygiene and preparation practices."