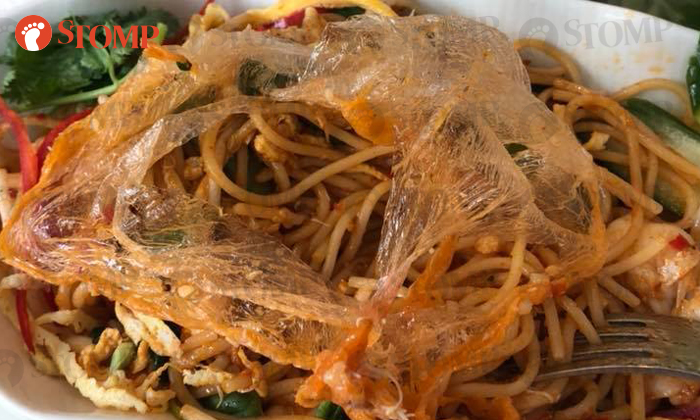 What Stomper Adrian initially thought was a fried egg in his crab meat mee goreng on Monday afternoon (April 2) turned out to be a plastic sheet.

Adrian told Stomp that he was having lunch at PS.Cafe at One Fullerton at around 1pm when the incident happened.

He said: "The dish I ordered was served at around 1.05 pm. I asked for some chilli. When it came, I started to eat my meal.

"Two mouthfuls later, what I thought was a fried egg seemed very difficult to chew.

According to Adrian, he then informed a waiter and the restaurant's duty manager about what happened. He also spoke to the chef and PS.Cafe's operation manager.

Said the Stomper: "They were very apologetic and acknowledged their mistake.

"However, I remain disgusted. It sickens me to think that I consumed cooked plastic (which is toxic).

"It also saddens me because PS.Cafe was one of my favourite restaurant chains that I would visit regularly with family, friends and colleagues."

In response to a Stomp query, a spokesman for PS.Cafe said: "We are sincerely disappointed that this incident happened in our cafe.

"Our management team immediately apologised to the customer and did what they could to assist and reassure him.

"We're very grateful that the customer brought this to our attention, allowing us to prevent an incident such as this from possibly happening again.

"We followed up with the customer shortly after he left the cafe and will continue to communicate directly with him, in the hope that he will return to PS.Cafe."