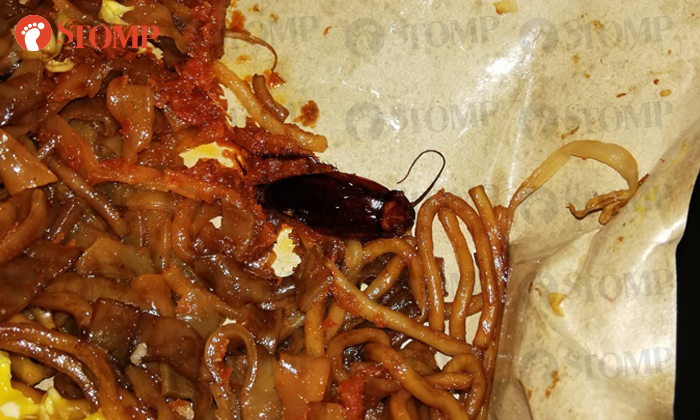 Stomper Anonymous was having fried kway teow for breakfast but ended up throwing it away after finding a cockroach in it.

The Stomper had purchased the takeaway meal from a hawker centre at Block 630 Bedok Reservoir Road last Friday (Sep 6), at around 10am.

Anonymous recounted: "I was having a few mouthfuls of my breakfast when to my surprise, I discovered an insect in the kway teow noodles.

"At first, I thought it might have been a strand of bee hoon because the kway teow was blocking the body and I only saw the antennae of the insect.

"I found it weird after awhile and decided to dig out the kway teow.

"It turned out to be a cockroach which was quite big.

"I am sharing this not because I want compensation but because the uncle that did the cooking was quite old. I don't want him to lose his job because of this incident and decided to give him a second chance. Therefore, I will not reveal the stall name.

"However, I find it really disgusting to have such a big insect in my food."

Anonymous, who returned to the stall the following day to inform the uncle of the cockroach, added: "He offered me a new packet of kway teow but I rejected it."