Didn't motorcyclist see 3 TP officers nearby before pulling this stunt in Hougang? 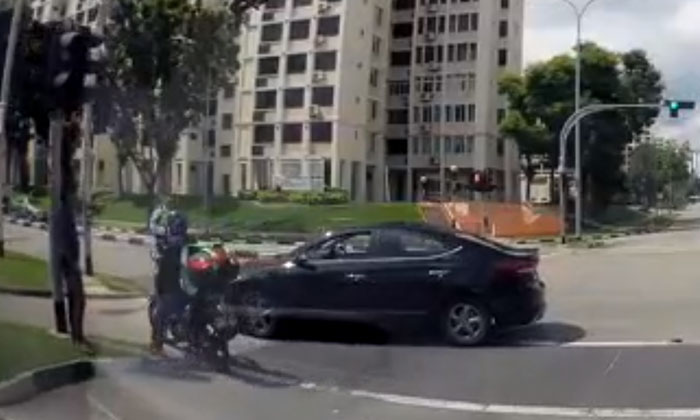 A cheeky motorcyclist was caught on camera veering onto a kerb in Hougang in front of three Traffic Police officers.

The video of the incident was posted by Facebook user Kal El shared on Facebook page SG Road Vigilante yesterday (Dec 5) at 12.05pm.

According to the timestamp of the video, the incident took place on Dec 5 at about 11.57am.

The caption accompanying the video said: "Just happened in Hougang. Wait for it...

"PS: Sorry for my laughter lol".

The video starts off with a stationary car, which appears to have been stopped by a TP officer.

Then, the video continues with the motorcyclist veering left onto the kerb, riding past a man, who seems to be a TP officer.

The supposed officer gestures at the motorcyclist, but he does not seem to return.

What you may not have noticed, is that the other road at the junction shows two TP officers on their motorcycles who seem oblivious to the situation.

As the car driver turns right, he laughs aloud at the situation.

He can be heard saying in Mandarin, referring to the TP officers: "Three of them! Oh my god."

Many Facebook users were amused by the laughter of the driver.

Facebook user Mario Goh compared his laughter to that of the wicked witch in Snow White.

Related Stories
Man dashes out of store after trying on shoes, but wait till you see what happens
Scooter riders perform stunts and climb parapet at The Cenotaph, treating it like a "skate park"
How is this motorcycle travelling along expressway without a rider?
More About:
unusual
motorcyclist
traffic police