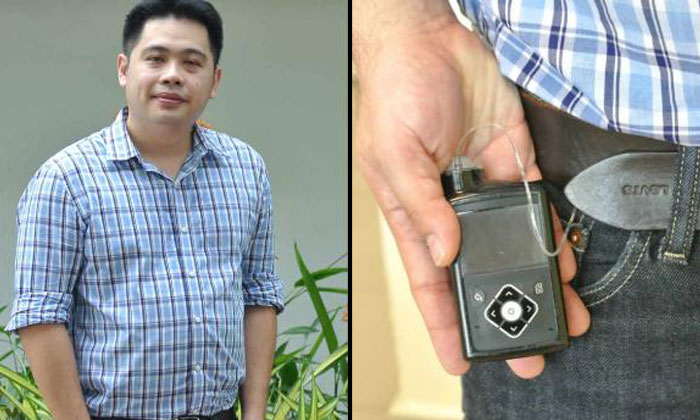 When he was just 10 years old, Melgious Ang was taunted for being diabetic.

His classmates would make fun of him for not being able to eat sugar, but he would ignore them.

Instead, he made sure he was careful about what he ate, avoided sugar and injected himself with insulin when he needed to.

For continuing to do that, Mr Ang, 31, has earned an award in the inaugural NUH (National University Hospital) Diabetes Medallist Programme, which will honour him and 18 other patients with type 1 diabetes who have managed the disease well for more than 20 years. (See report above.)

NUH will be giving out the awards on Nov 14, which is World Diabetes Day.

Mr Ang, who is pursuing a doctorate in philosophy at the National University of Singapore (NUS), was diagnosed with the condition when he was eight years old.

He was hospitalised for a week and described it as a nightmare.

"I did not know what it (type 1 diabetes) really was, except that I was told that I need to start (using) insulin injections (every day)," he said.

"It was a confusing period."

When he went back to school, the peer pressure and taunting started.

"My friends pressured me (to eat the food I was not allowed to eat). It did not help that there were bullies. They would come up to me and say 'no sugar, no sugar' to me all the time," Mr Ang said.

He said that for a short time after the diagnosis he rebelled by disobeying the diet plan that doctors gave him so he could eat like his friends.

"When I was younger, I always wanted to fit in and be a part of a group. But then, when you have diabetes, how do you really fit in?"

By the time he was nine, Mr Ang was doing the injections himself, sometimes in school.

Again, some unthinking students made fun of him for that.

But he took comfort in his good friends who understood the seriousness of his condition.

About 11 years ago, Mr Ang stopped injecting himself and got an insulin pump, which delivers insulin 24 hours a day through a catheter placed under the skin.

He still has to be careful about what he eats, but the pump automatically ensures that his blood sugar levels are within the proper range.

Another award recipient, food technologist Koh Wanlin, 35, has been coping with type 1 diabetes since she was diagnosed when she was 13 months old.

Her mother was 25 and a housewife when she found out.

Madam Ng Siew Eng, now a 59-year-old retiree, said: "It was very hard at first. There was a lot of pressure on me.

"I also had to take care of the kids (Ms Koh and her older sister, who was three years old at the time).

"But after I knew that she (Ms Koh) had diabetes, I knew that I had to do everything I could to take care of her because she is my child."

Ms Koh's parents even bought over her grandfather's Circuit Road shophouse, which sold household items, so that her mum could work there and look after her.

"So we lived in the shop, just so she could give me my injection three times a day and make sure I got my meals on time," said Ms Koh.

"She would also keep watch over me. I could not be alone for long periods of time so she would always keep me by her side."

She said one of the major misconceptions about type 1 diabetes that she faced was that her mother was to blame for her condition.

"People would ask me, 'What did your mother do?'

"It is quite hard to explain so we just say that we don't know, which is the truth," said Ms Koh. The cause of type 1 diabetes is still unknown.

Ms Koh, who still injects herself every day, said: "I have lived with diabetes for 34 years so it is already a part of my life."

The National University Hospital (NUH) Diabetes Medallist Programme aims to raise awareness about the illness, highlight the challenges faced by type 1 diabetics and give an insight into how to live successfully with diabetes.

Dr Yew Tong Wei, a diabetes specialist at NUH and organiser of the programme, said: "To manage diabetes successfully effective self-management is essential.

"This is to prevent and minimise the risk of developing complications of diabetes in future. These include blindness, kidney failure, numbness, heart attacks, strokes and circulation problems.

"Patients need to be ready and motivated and willing and able to acquire the correct skills, knowledge and confidence to live well with the disease and become an expert in this regard."

Dr Yew added: "Recognising challenges that our patients face, we know that to live well with type 1 diabetes without significant complications is not an easy task and therefore we want to celebrate and motivate them to continue to journey on."

There are two types of diabetes.

There is no known way to prevent type 1 diabetes - where the body does not produce insulin - which usually hits the young.

Type 2, where there is too little insulin or the body cannot use the insulin effectively, is preventable, and by far the more common, accounting for about 90 per cent of diabetes cases worldwide.

It is largely caused by a sedentary lifestyle and a diet consisting largely of simple carbohydrates like white rice and sugary drinks.

Insulin is needed to move sugar from the blood to tissues in the body.

Related Stories
Thank you, man for standing up against bully who cut my queue and called me 'bitch' at POSB Bank in Jurong West
Mother of six in S'pore 'recovers' from brain condition -- after playing World of Warcraft
More About:
inspiring
hospital
diabetes
bully