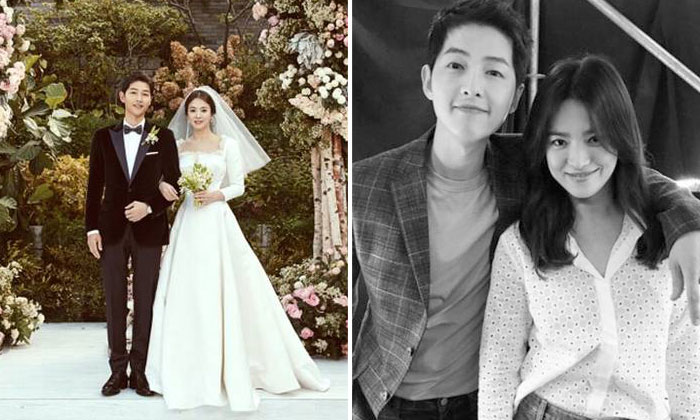 South Korean celebrity couple Song Joong Ki and Song Hye Kyo, who tied the knot in real life in 2017 after playing a sizzling couple on screen, have announced their split.

Song Joong Ki, 33, who gave a statement to fans through his lawyer, said he hoped for an amicable divorce.

He officially filed for divorce from Song Hye Kyo, 37, at the Seoul Family Court on Wednesday (June 26).

The statement shared with online portal Soompi read: “Hello. This is Song Joong Ki. First, I’d like to apologise for delivering this unfortunate news to the many fans who love and care for me.

“I have begun the process of filing for divorce from Song Hye Kyo. Rather than denouncing each other and arguing over who is to blame, I hope that the divorce process can be wrapped up amicably.

“I ask for your understanding in regard to the fact that it is difficult to discuss the details of my personal life, and I will recover from my current wounds and do my utmost as an actor to repay you through great productions in the future. Thank you.”

Posted by The Straits Times on Wednesday, 5 July 2017

On Thursday, Song Hye Kyo's agency, United Artists Agency (UAA), also released an official statement about the divorce proceedings, saying the split was due to differences in their personalities.

A representative of the agency, in a statement to Soompi, said: “We find it unfortunate that we are greeting you with unhappy news. After careful consideration, actress Song Hye Kyo and her husband are taking the first steps towards a divorce.

“The reason for the divorce is differences in personality, and because the two were unable to overcome their differences, they were forced to come to this decision.

"We respectfully ask for your understanding in regard to the fact that we cannot confirm any further details out of respect for the two actors’ personal lives. Additionally, we urge you to refrain from making scandalous posts and speculative comments.”

Earlier this year, South Korean media had speculated that the Song-Song couple, as they are most popularly known, were going through a possible divorce as Song Hye Kyo had appeared in public without her wedding ring.

During his press conference for his latest drama Arthdal Chronicles last month, Song Joong Ki seemed to have put the rumours to rest, after he spoke about how his relationship with Song Hye Kyo has changed since their marriage.

He said: "Nothing changed too drastically, but I do feel like I’ve become more emotionally stable as a result. I feel like all married people would understand this feeling."

The Song-Song star couple from Korean hit drama Descendants of the Sun have written letters to their fans explaining their decision to get married on Oct 31. We break the letters down. http://str.sg/4aKp

Posted by The Straits Times on Thursday, 6 July 2017

Song Joong Ki and Song Hye Kyo married on Oct 31, 2017, in an intimate outdoor ceremony at Yeong Bin Gwan, a Korean-style banquet annex to The Shilla hotel in Seoul.

Despite tight security, photos of the couple on a lawn – she, in a white low-cut gown, looking at him – also surfaced on Weibo.

According to reports, the groom was in tears before he even said his vows. She also shed tears during the ceremony.

It was reported that they had their honeymoon in Europe.

The celebrity couple met while filming the 2016 hit drama series Descendants Of The Sun.