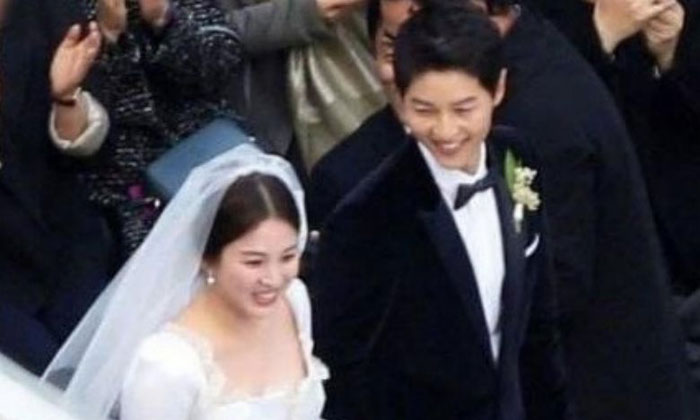 The wedding was held at Yeong Bin Gwan, a Korean-style banquet annexe to The Shilla hotel in Seoul, reports The Korea Herald.

Although the couple kept thing private and did not hold a nuptial press conference, the area surrounding the wedding venue was flooded with fans and reporters.

Despite the tight security, photos of the happy couple have been circulating on Weibo and Instagram.

They were seen looking lovingly at each other.

Joong-Ki, 32, looked dapper in a tux while his wife was wearing a white gown with a square neckline, just a few weeks shy of her 36th birthday.

The guest list included around 300 friends and family including on the groom's side, actors Lee Kwang Soo, Zo In Sung, Cha Tae Hyun and Park Bo Gum.

Actresses Kim Hee Seon and Song Yoon Ah, as well as actor Yoo Ah In, were guests of the bride.

It was reported that Chinese star Zhang Ziyi was in attendance as well.

The couple first got hearts fluttering playing a couple on smash hit drama Descendants Of The Sun in 2016 which catapulted their careers but also brought them closer together.

Rumours of them dating started in Mar 2016 but were only confirmed when they announced that they were getting married in July this year.