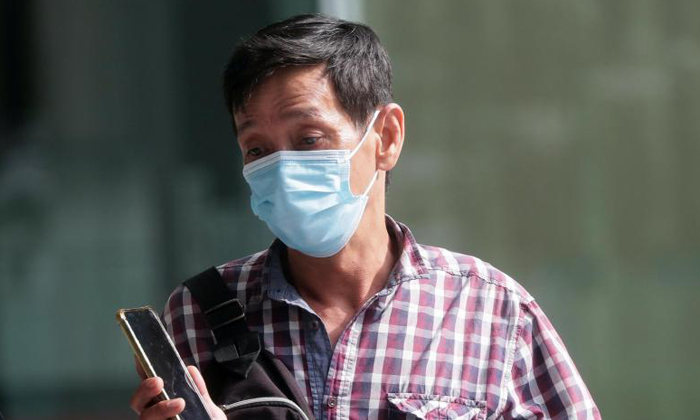 Upset with a 15-year-old boy following an encounter on a pedestrian footpath, a man tailed the minor before flashing the teenager an obscene hand gesture.

The 51-year-old Singaporean pleaded guilty on Tuesday (Jan 11) to assaulting the teenager, who cannot be named as he is below the age of 18.

Lim was riding his power-assisted bicycle on a pedestrian footpath in Ang Mo Kio Avenue 10 at around 11.30pm on Aug 21, 2020, when he had to jam on his brakes to avoid colliding with the victim and his friends, who were standing on the pathway.

He told them to move and the group complied.

Lim, who was fulfilling a food order, stopped his bicycle a few metres from the group.

The boy's friends then made their way to a nearby coffee shop.

Deputy Public Prosecutor Shenna Tjoa said: "The victim continued walking along the footpath. The accused was upset and followed the victim.

"When the victim turned his head around to look at the accused, the accused (flashed him an obscene gesture). A verbal dispute ensued."

At around 11.40pm, Lim approached the boy and headbutted his left cheek once.

Lim did not reply when the teenager asked him why he reacted in such a manner.

Instead, the delivery rider continued to headbutt the minor's left cheek about three more times.

Court documents did not state who alerted the police, but officers arrived at the scene soon after.

Paramedics, who also turned up, noticed some swelling on the boy's left cheek.

He was given a cold compress before he was released to his father's care.

The boy did not go to a hospital to seek medical treatment, the court heard.

On Tuesday, DPP Tjoa asked for the court to sentence Lim to a high fine.

She said that the harm caused was low and the offence was not premeditated.

The prosecutor, however, said that Lim had struck an vulnerable part of the boy's body - his face. Lim will be sentenced on Jan 25.