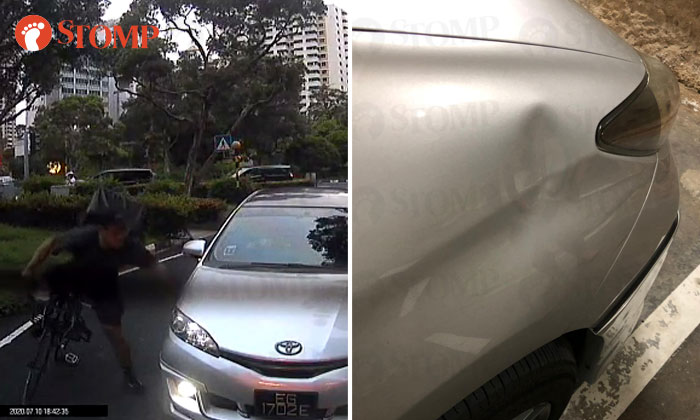 The police are investigating an incident where a delivery rider was caught on video hitting a car with his fist in a fit of anger.

Stomper Clara alerted Stomp to the incident that happened to her friend who was driving along Havelock Road on July 10.

In videos shared by the Stomper, the cyclist, who is wearing a food delivery pack, is seen riding in the leftmost lane.

The car is seen trying to filter left to enter a slip road and slows down to let the rider pass first.

However, the cyclist appears to be unhappy and makes a detour to go after the car.

He is then seen gesturing angrily at the driver before punching the right side of the car's bonnet and riding away despite a man calling after him to come back.

In a photo shared by Clara, the rider's fist left a dent on her friend's car.

She told Stomp her friend is looking for the cyclist and made a police report immediately following the incident.