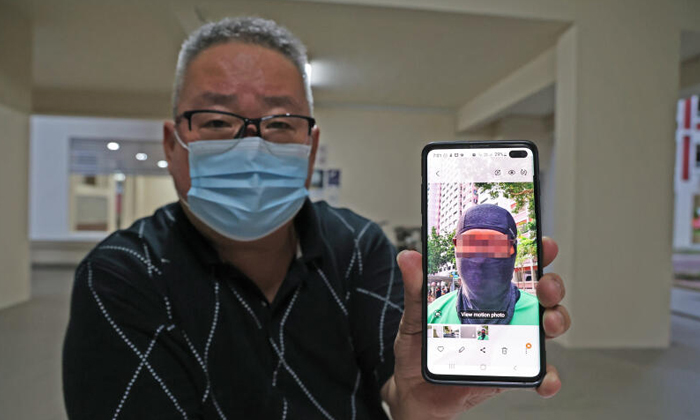 A delivery rider has been arrested after allegedly assaulting a taxi driver in Choa Chu Kang on Saturday (March 26).

The rider allegedly punched the taxi driver three times in the face and once on the waist before fleeing the scene, reported Shin Min Daily News.

He then returned 10 minutes later to apologise, and was arrested by the police.

Mr Lin Qing Hui, 59, told Shin Min he was driving along Choa Chu Kang Crescent around 5pm when the delivery rider on his motorcycle switched lanes suddenly, narrowly avoiding a collision with his taxi.

Mr Lin honked at the rider, who then flashed his middle finger in response.

Mr Lin said he honked again, and this time, the rider overtook the taxi before stopping in front of it. He got off his bike and walked over to the taxi.

Assuming the rider wanted to talk, Mr Lin rolled down his car window. But without saying a word, the rider punched him three times across the face.

As Mr Lin ducked towards the passenger seat, the rider punched him again in the waist.

The incident, which occurred near a bus stop opposite Block 666 Choa Chu Kang Crescent, caught the attention of a passer-by who called the police.

The rider sped off on his motorcycle, only to return later on to apologise. By that time, the police had arrived at the scene.

Mr Lin said the rider wanted to apologise to him, but Mr Lin said it wasn’t necessary, and told him to explain what had happened to the police instead.

The police arrested the delivery rider, a 41-year-old man, for public nuisance.

Mr Lin, who was taken to hospital after the incident, is recovering at home.

When Shin Min spoke to him two days after the incident, his right cheek was swollen and he said he was still in pain.

"I've learnt that the next time something like this happens, don't lower the car windows," he said.