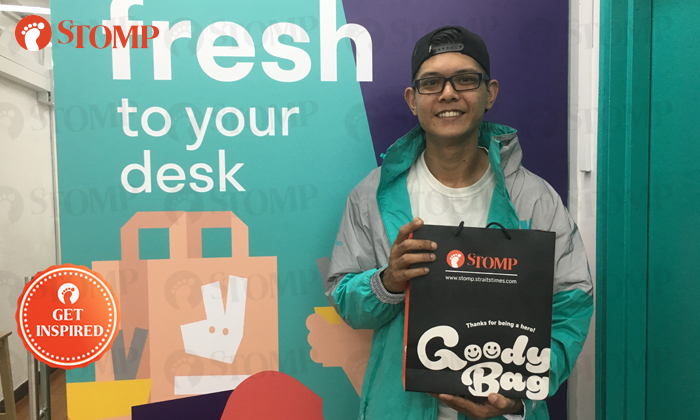 Most people probably do not find their first day at work memorable, considering that they are still adapting to a new environment and trying to learn the ropes.

Part-time Deliveroo rider Angelo Lau, however, will most likely never forget his, now that there is a viral video of him helping a wheelchair-bound elderly man across the road.

A car driver filmed Angelo performing the kind deed at the traffic junction of Tampines Avenue 9 and Tampines Street 42 on the night of May 27 -- also his first day at work with the food delivery service.

A video of the heartwarming incident was posted on Facebook by ROADS.sg, earning Angelo a Stomp Goody Bag as well as praise from netizens.

We love to post good happenings on our roads.

Here we witness a great Deliveroo rider coming to the assistance of an...

Angelo had been part of the company's pioneer delivery team when it was first launched in Singapore in 2015, but left to pursue a career in sailing.

He recently rejoined Deliveroo, collecting and sending food orders on days when he is not at his full-time job.

The 30-year-old Chinese-Filipino had been on his way to deliver an order when he spotted the elderly man stopping his wheelchair in the middle of the road.

Angelo told Stomp in an interview at Deliveroo's Tanjong Pagar office on June 4: "When I turned to my right, I saw that the uncle was pushing himself across the road. After awhile, he just stopped in the centre.

"The moment he stopped in the centre, that's when the traffic light turned green.

"I shifted my bike to the left side of the road and went down to help the uncle. I told him in Mandarin, 'Come uncle, let me help you.'

"I pushed him across the road and he kept saying thank you."

Asked what spurred his actions, Angelo said: "It's just being human."

He also trusts that anyone in the situation would have done the same.

"I believe the car driver who filmed the video had also wanted to come out to help but there were other vehicles passing by. I think he was also with his son.

"It was easier for me to get down from my bike and help."

Despite the positive reception that he has received, Angelo remains humble.

He added: "Even if it's a small thing, just lend a hand because sometimes it can create a ripple. It can actually encourage people to help.

"This world belongs to everyone."