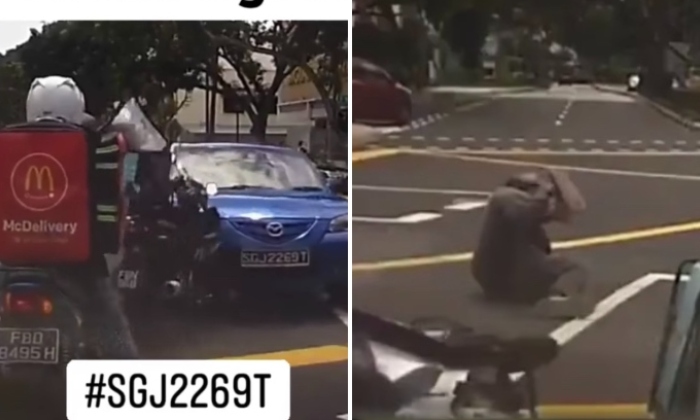 A Deliveroo motorcyclist was taken to hospital after a Mazda car crashed into him at the junction of East Coast Road and Siglap Road.

The accident, which happened on Saturday (Oct 3), was caught on camera and the video has been circulating on social media over the weekend.

In the video posted on the SG Road Vigilante Facebook group, a blue Mazda can be seen colliding with the Deliveroo rider, who was stationary and waiting to make a right turn.

The Deliveroo rider tries to move out of the way but ends up getting hit by the car.

A McDonald's delivery rider who was also waiting to make a right turn then falls to the ground after tripping over the Deliveroo rider's motorcycle.

In response to a Stomp query, the police said they were alerted to the accident involving a car and a motorcycle at 2.36pm.

"The 44-year-old male motorcyclist was conscious when conveyed to Changi General Hospital," added the police spokesman.